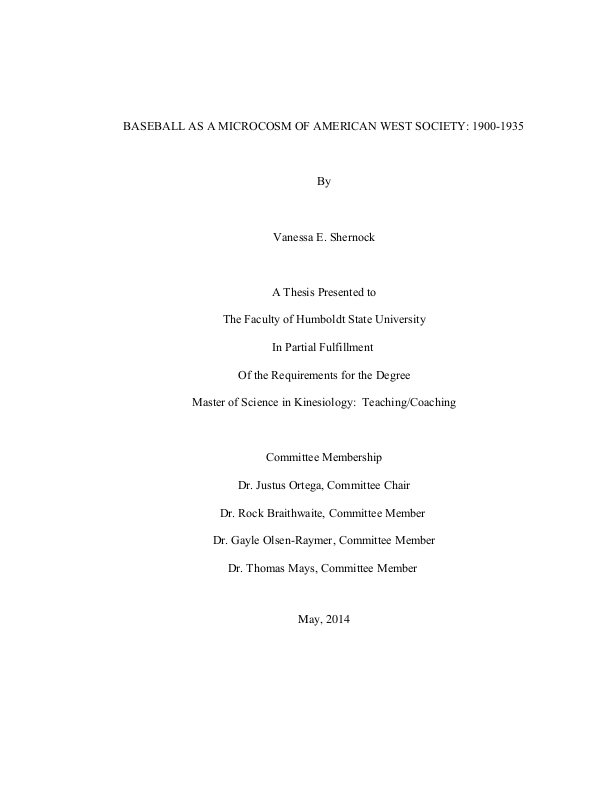 PURPOSE: To thoroughly document the connections between the society and culture of the American west and baseball between the years 1900 and 1935. METHODS: This research is an ethnographic narrative inquiry that utilized qualitative content analysis of primary sources augmented by secondary sources. SOURCES: Primary sources were gathered from the Library of Congress (LOC) online historical newspaper collection, San Francisco Chronicle microforms, online digital collections like the California Archives and Time Magazine archives, online digital archives of the Covina Public Library and the Casa Grande Public Library, Google Newspaper Archives, the Las Vegas Age, Historic Oregon Newspapers, the Wyoming Newspaper Project, the Colorado Historic Newspaper Collection, and the Utah Digital Newspaper collection. In addition to primary sources, the author embedded secondary sources that fortified her arguments. RESULTS: This thesis has been broken down into four main topics. The first topic discussed the 19th century extractive industries that created rapid westward expansion and lead to the spread of baseball across the American west. The second topic explored the investments in western baseball as well as the transportation industries, such as railroads and automobiles, that affected the American west baseball industry. The third topic, progressivism, discussed how progressivism attempted to reform western baseball with respect to alcohol, Sunday baseball, and gambling. The fourth and final topic of this thesis explored western baseball's relationship to Americanism and the Great Depression. CONCLUSION: The primary source evidence supports this authors argument that throughout the first 35 years of the 20th century, the west's baseball experience was transformed. The regional differences in 1900 that had set American west baseball apart from the baseball in the American east had faded throughout time, and by 1935, American west baseball had been molded, reformed, and popularized to achieve integration into the homogenized American pastime. The American west society in 1900 had still been attached to the ideals of the rowdy western frontier. However, as years passed, American west society, viewed through the perspective of baseball, shed its frontier mentality to become integrated and assimilated into the rest of mainstream American society. As a result, the American pastime thrived in the west.