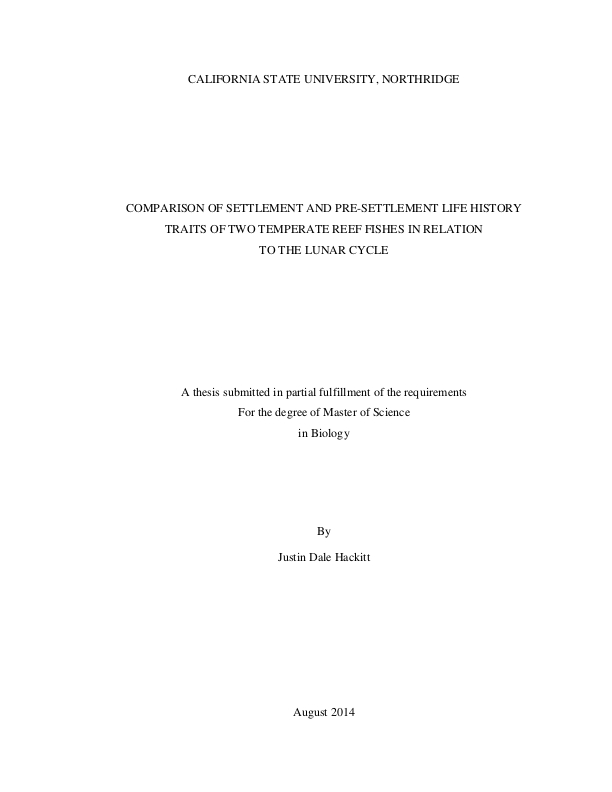 Settlement patterns and pre-settlement larval traits of fish species can directly influence the local population and community structure. Lunar cycles may play a role in determining these settlement patterns and traits. Depending on the lunar phase, onshore transport may vary in strength, directly influencing larval supply from the pelagic environment to suitable reefs. Also, without suitable onshore transport, larvae may delay their settlement, increasing their size and age at which they settle to a reef. The purpose of this study was to examine the effects of lunar variation on settlement rate and settler quality of two temperate reef fishes. This was accomplished by examining settlement rates and pre-settlement traits in the señorita, Oxyjulis californica, and the blacksmith, Chromis punctipinnus. SCUBA surveys of settlement rates and collections of each species took place within 1-2 days of the New, 1st Quarter, Full, and 2nd Quarter lunar phases, from June-August 2012, at two sites at Santa Catalina Island, California. Using the lapillar otoliths, size at settlement, pelagic larval duration (PLD), and average daily larval growth rates were examined in both species. The effects of lunar phase on settlement were inconsistent, with no apparent lunar pattern in señorita and peaks in settlement occurring during the New and 1st Quarter moon phases in blacksmith. The physical factors that vary with lunar phase such as temperature, tidal amplitude, and internal waves, most likely did not impact settlement for either species. Adult spawning behavior may drive the settlement patterns observed in this study. Larval traits did not differ significantly among lunar phases in either species. Both species had relatively narrow ranges of size at settlement, with highly variable PLDs. This variability could be, in part, due to variation in growth rates, caused by either pre-hatching or pre-settlement variables, rather than environmental cues near the time of settlement, such as lunar phase. This study adds to the limited number of studies on settlement patterns of temperate fish species. Understanding the processes that affect settlement rates and larval traits helps us understand population dynamics and community structure.