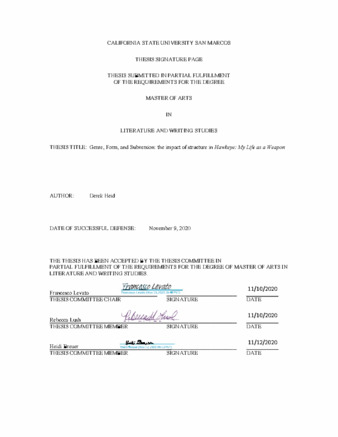 Genre, Form, and Subversion: the Impact of Structure in Hawkeye: My Life as a Weapon

For better or worse, the expectations and assumptions of a medium as prominently addressed as those toward Comics cannot be ignored; oftentimes, in fact, these expectations can be leveraged to great effect. Take as an example Matt Fraction and David Aja’s 2013 limited series Hawkeye: My Life as a Weapon, which is notable for a number of stylistic choices that deviate from previous character outings. These choices - foregoing of the title character’s trademark costume; the omission of the character’s super-powered teammates; rebranding the character as a questionable choice, morally or intellectually, for the roles of hero and mentor - help to imagine the central character, Clint Barton (alias Hawkeye), as a hard-boiled ‘hero of the people’ rather than his more prominent Avenger alter ego. For a hero who has alternatively been a government assassin, a literal giant, a masked swordsman, and a galaxy-trotting member of a team that includes demigods and monsters, the concept of a Hawkeye that is not sure whether he measures up is refreshing for its being relatable. This revision falters on its own, however: grittiness and street-level crime have been the vogue of the superhero comic genre for thirty years and heroes such as Luke Cage have arguably made it their life’s work for even longer. Without an equal emphasis on storytelling, this re-imagined Hawkeye offers nothing new as the ‘struggling hero’ angle, while interesting, is both far from a new and rife with expectation. In order to avoid this argumentative pratfall a reader of Hawkeye: My Life as a Weapon must bear in mind that the work’s delivery is just as important as its content; in the best case, content and form exist to bolster one another. Matt Fraction and David Aja’s nineteen-issue run on Hawkeye: My Life as a Weapon recalls precisely that, embracing and subverts the expectations placed upon their work’s content and genre, emphasizing rather than shirking the assumption that, for Comics, the means of presentation must mean more than what is presented. By engaging a nuance of delivery not commonly associated with the form whilst simultaneously telling what can only be described as a “superhero comic book story”, Fraction/Aja’s Hawkeye: My Life as a Weapon weaponizes expectation of the superhero comic’s treatment of visual narrative, time and sequence, and the characteristics of the (super)hero archetype in order to present a work that is compelling for its refusal to submit to the system in which it exists.