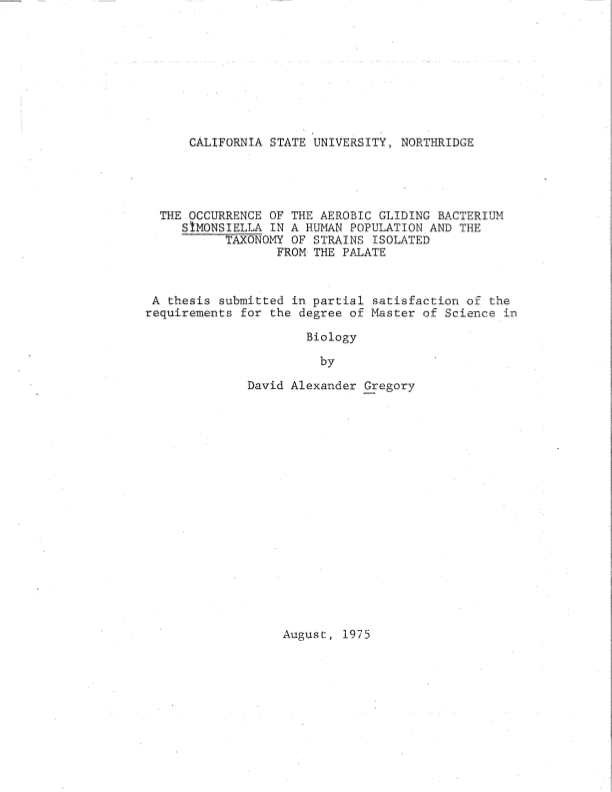 A population of college students with presumably healthy mouths was surveyed for the gliding, mulcicellular filamentous, aerobic oral bacterium Simonsiella. The microscopic examinations of swabbings from the palate showed 32.1% of 212 individuals to harbor this organism on the hard palate. The 7.8% sexual difference between the frequency in males (35.2%) and in females (27.4%) was not significant (P = 0.05). Seventeen pure strains of Simonsiella were isolated from humans as well as two from cats and one from a dog by means of a direct isolation technique. The strains of human origin were included in a taxonomic study comprising additional strains from 19 dogs, 8 cats, 4 sheep, and the neotype strain of Simonsiella crassa. The taxonomic study established the existence of three distinct physiological groups of Simonsiella, that corresponded to their source of isolation. The sheep strains were similar to the neotype strain of S. crassa and were different from the other strains by their proteolytic activity on casein agar, gelatin, inspissated serum, and litmus milk, and by their ability to produce acid from glucose, maltose, trehalose, mannitol, sucrose, fructose, and ribose. The human strains produced acid only from glucose, maltose, and trehalose, and did not display proteolytic activities. The dog strains did not produce acid from carbohydrates nor did they demonstrate proteolytic activity on gelatin, inspissated serum, or litmus milk. The cat strains were similar to the dog strains. Morphologically, the California sheep isolates formed a uniform group and could be classified as S. crassa. The human strains possessed filament widths that fall into the range of S. crassa and S. muelleri. Most dog strains generally possessed filaments that were wider than those isolated from other sources. The cat strains displayed great morphological variation; some resembling the sheep and human strains, and others resembling the wider dog isolates. The distinction of the physiological groups of Simonsiella strains on a morphological basis was not possible.