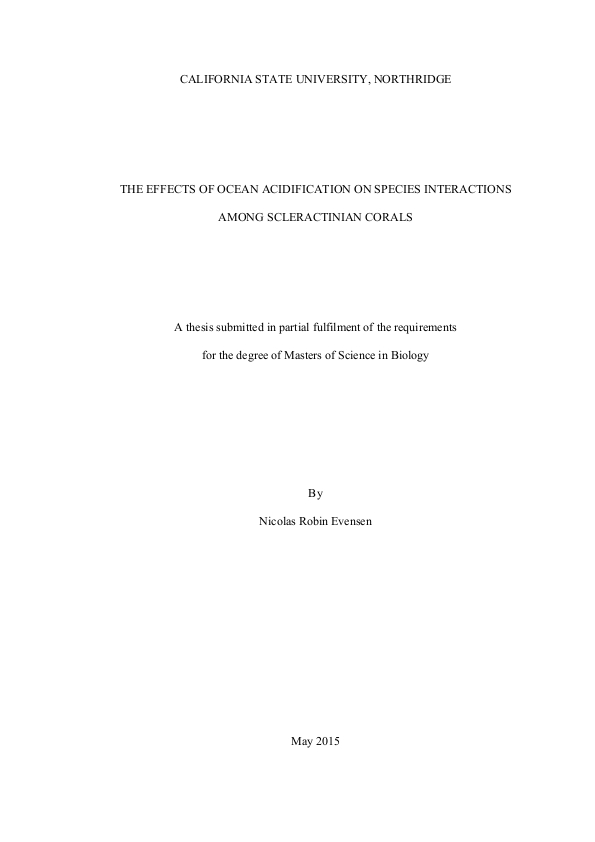 Effects of Ocean Acidification on Species Interactions among Scleractinian Corals

As large amounts of information are becoming available describing the responses of corals to ocean acidification (OA), attention is turning to the effects of OA on ecological processes affecting community structure. One such process is competition for space among scleractinian corals, a process that could be affected by OA due to inter-specific differences in sensitivity of corals to increasing oceanic pCO2. Thus, experiments were carried out in Spring 2013 and 2014 in order to determine the effects of OA on species interactions among scleractinian corals. In 2013, experiments were designed to test the hypothesis that OA affects the ability of M. aequituberculata and massive Porites spp. to engage in spatial competition in Moorea, French Polynesia, and Okinawa, Japan. Using linear extension rates (μm d-1) as a proxy for competitive ability, the effects of OA were tested on intraspecific, interspecific, and control pairings. Linear growth of M. aequituberculata was affected by OA in Okinawa, with no OA effect on massive Porites spp. Much of the reduction in growth between the ambient and OA treatments was due to a decrease in the control pairings however, with corals in competitive pairings maintaining linear growth rates under OA. Subsequently in 2014, I tested the hypotheses that: (i) OA alters interactions among corals arising from conspecific and interspecific coral arrangements, and (ii) the effects of OA on coral growth are modulated by adjacent coral colonies. The hypotheses were tested by measuring the effects of OA on the growth of P. verrucosa in spatial arrangements with conspecific and interspecific colonies. In this experiment, the effects of OA on calcification of the focal P. verrucosa colonies was mediated by surrounding colonies, with calcification rates for the focal corals in conspecific aggregations increasing in the OA treatment. Furthermore, planar growth was reduced by OA, while apical growth was unaffected. Overall, the results of both studies demonstrate the potential for OA to affect the ability of corals, M. aequituberculata and P. verrucosa in this case, to engage in spatial competition, with linear and planar growth reduced by OA. The results also emphasize the importance of considering biotic interactions when assessing the effects of OA on corals, as M. aequituberculata was shielded from the detrimental effects of OA when engaged in competitive interactions, and the negative effects of OA alleviated for P. verrucosa colonies in conspecific aggregations.