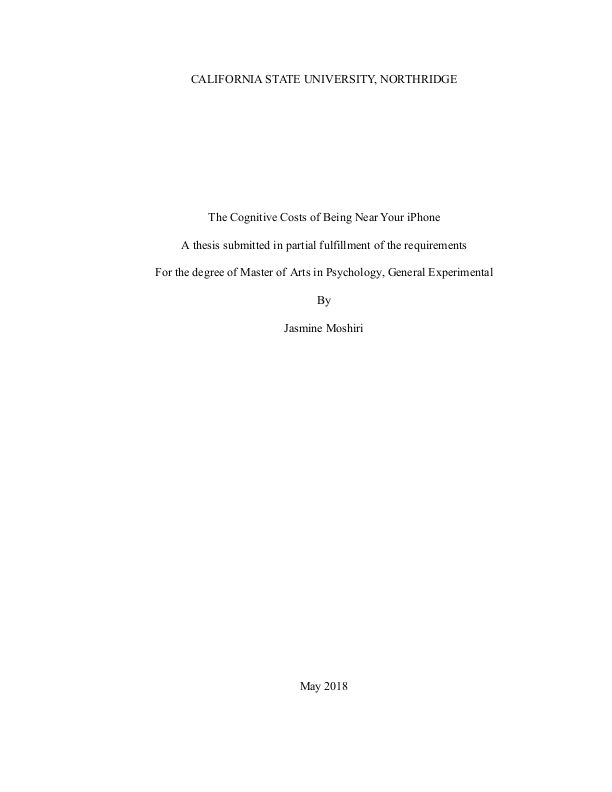 Cognitive Costs of Being Near Your iPhone

The cognitive processes affected by smartphones are just recently being examined. Current literature demonstrates downfalls to both smartphone presence and absence (Clayton, Leshner, & Almond, 2015; Hartanto & Yang, 2016; Thornton, Faires, Robbins, & Rollins, 2014). While some studies reveal correlations between increased phone activity and negative outcomes [increased anxiety and decreased cognitive performance (Li, Lepp, & Barkley, 2015)], others demonstrate how being separated from one's smartphone can cause increased anxiety, leading to decreased cognitive performance (Hartanto & Yang, 2016). This study aimed to assess how the presence or absence of smartphones can affect cognition, while also investigating the mechanisms by which smartphone presence affects cognition. Furthermore, since both smartphone presence and separation may be detrimental to cognition, a novel solution suggested in this study is to limit functions of individuals' smartphones. Do Not Disturb, a feature on iPhones that allows users to disable notification alerts manually or during scheduled intervals of time, was examined as a potential middle ground between absent and present smartphones. This experiment employed a single factor between-subjects design with three levels. The independent variable was iPhone presence and the levels were: active iPhone, non-active iPhone, and no iPhone. One hundred and forty-four participants were randomly assigned to one of three conditions where they performed three cognitive tasks (color-shape switching task, Sustained Attention to Response Task, and Stroop Task) with either their iPhones present and active, their iPhones out of sight, or their iPhones present but non-active (in Do Not Disturb mode). The analyses revealed that in contrast to previous studies, smartphone presence (or absence) did not have a significant influence on cognitive performance. A potential explanation for the discrepancy in the results of this study compared to previous literature is the simplicity of the tasks used in this study relative to those in previous research. Together with previous research these results may indicate that on simple tasks smartphone presence has fewer deleterious effects on cognitive performance. Future research directions are discussed.