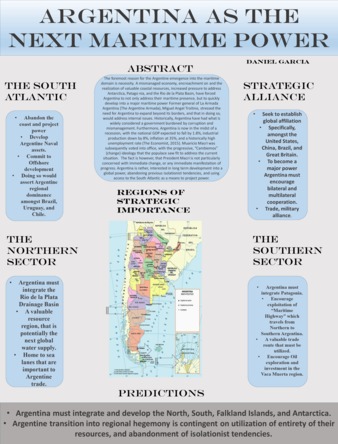 Argentina as the Next Maritime Power

The foremost reason for the Argentine emergence into the maritime domain is necessity. A mismanaged economy, encroachment on and the realization of valuable coastal resources, increased pressure to address Antarctica, Patago nia, and the Rio de la Plata Basin, have forced Argentina to not only address their maritime presence, but to quickly develop into a major maritime power Former general of La Armada Argentina (The Argentine Armada), Miguel Angel Troitino, stressed the need for Argentina to expand beyond its borders, and that in doing so, would address internal issues. Historically, Argentina have had what is widely considered a government burdened by corruption and mismanagement. Furthermore, Argentina is now in the midst of a recession, with the national GDP expected to fall by 1.8%, industrial production down by 8%, inflation at 35%, and a historically high unemployment rate (The Economist, 2015). Muaricio Macri was subsequently voted into office, with the progressive, “Cambiemos” (change) ideology that the populace saw fit to address the current situation. The fact is however, that President Macri is not particularly concerned with immediate change, or any immediate manifestation of progress. Argentina is rather, interested in long term development into a global power, abandoning previous isolationist tendencies, and using access to the South Atlantic as a means to project power.