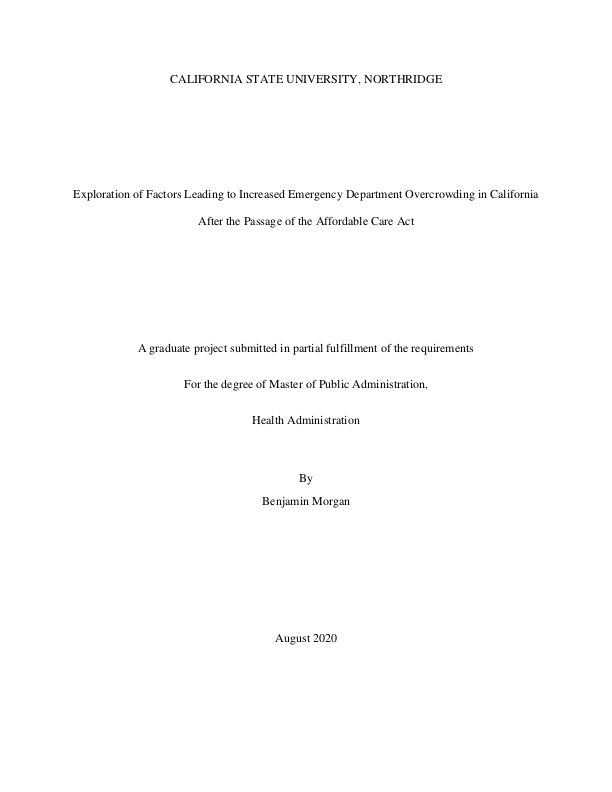 Given that the Affordable Care Act (ACA) broadly increased insurance coverage to the population of California, has increased coverage resulted in enhanced access to care? With a demonstrable trend in the increase in Emergency Department (ED)utilization and overcrowding in recent years, has the ACA impacted the utilization of ED's within the state? Many studies have been conducted that highlight the impact of the ACA on various population groups utilizing the ED and why this may affect patient volumes. Not least of these are homeless populations, patients requiring behavioral health services and those who are struggling to engage with primary care providers. Many authors have suggested that with better insurance coverage, patients could be diverted from using the ED, yet relevant data does not overwhelmingly seem to support this. Ambulance patient offload delays (APOD), have been recognized as one of the few objectively quantifiable metrics associated with ED overcrowding. According to Los Angeles County EMS in 2017, ambulances and crews held up at EDs negatively impact response times to 911 calls. This would suggest that policy attempts to reduce ED visits have perhaps not been as successful as initially hoped. ED overcrowding, at its core, is a mismatch of patients needing care to the space and staff needed to provide it. With hospital resources typically being fixed, the variable is high ED visit volumes. This leads to a need to understand why patients are still seeking care in the ED even after significant progress has been made in providing insurance coverage to California's most in need populations. Several policy holes can be identified that are contributing to the seemingly intractable overcrowding of California EDs including chronic underfunding of the primary care establishment, mandated nurse to patient ratios and ambiguous regulation regarding the management of ambulance diversion. To effect meaningful change in these areas, it will require effective policy maneuvers and an increase in funding to primary care. At a time when social injustice, racial inequality and access to care are at the forefront of public sentiment, these policy issues seem be gaining momentum within the issue attention cycle. This study is a qualitative analysis of archival data of peer-reviewed journal articles. It explores the complexities of California care access following the implementation of the ACA exposing causative factors of emergency department overcrowding. While large parts of the California population have been brought under the umbrella of some form of insurance coverage in the last decade, the predicted drop in emergency department usage has failed to materialize. Emergency department overcrowding, as indicated by the practical problem of entangling ambulances when attempting to transition the care of their patients or worse, rerouting them and delaying care to the most vulnerable of populations, is steadily worsening. Chronic and ineffective funding to the primary care sector, lack of regulatory clarity in the transition of care from emergency services to hospitals and longstanding staffing regulations are all contributors to this issue. The use of the emergency department by large swaths of the California populace to fill the gap that remains in obtaining accessible, convenient and high-quality primary care remains the greatest contributor to emergency department over use. At a time when equality & access to care are rapidly rising within the Downs attention cycle, an international pandemic threatens the sustainability of the primary care establishment by starving it of funding. Governmental interventions in this space have been largely ineffective to date and planned initiatives will need to be adjusted given the current public health crisis. As the country stands at the cusp of perhaps its most contentious election cycle, it seems plausible that the issue of appropriate primary care funding may become important enough to a public in need, that it gains traction in the coming months.