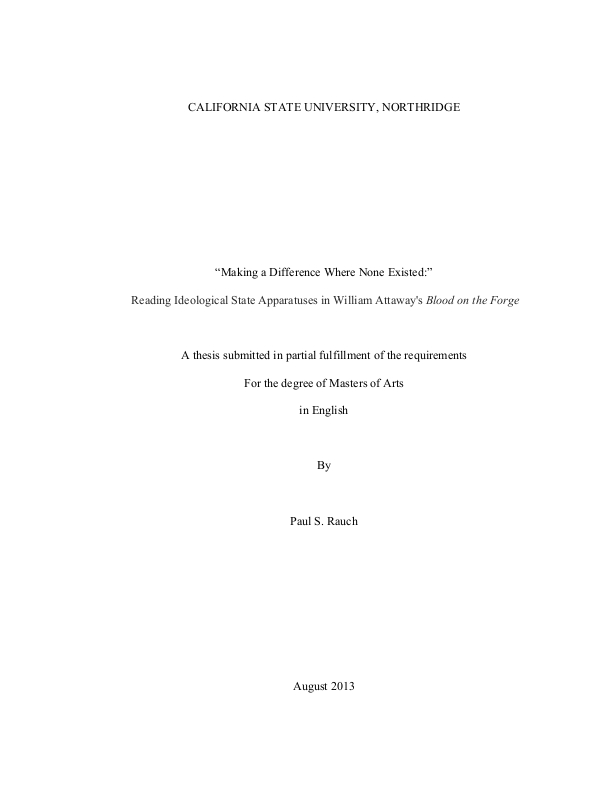 "Making a difference where none existed:" reading ideological state apparatuses in William Attaway's Blood on the Forge

Set in 1919 during the Great Migration, William Attaway's 1941 Proletarian novel, Blood on the Forge, a text too often overlooked by the mainstream of literary studies, follows the three Moss brothers from their experience tenant farming in the agrarian South to steel working in the newly industrialized North. Seemingly anticipating Louis Althusser's highly influential work, "Ideology and the Ideological State Apparatuses," Blood on the Forge portrays indissoluble cultural, ideological, and material conditions. The cumulative spectrum of the novel's portrayal links the Mosses' immediate struggles to a broader system of exploitation. Attaway's depiction of the South foregrounds dialectical relationships between black folk culture and the white aristocracy, while undercurrents in the text emphasize ideological underpinnings that work to maintain dominance in these dialectical relationships. An overwhelming presence of violence pervades all aspects of the Mosses' lives. Work life, family life, social engagement, and thus conscious and subconscious ideologies are shaped by repression consisting of physical and mental violence. While Attaway portrays racism and repression dominating the South, and although the dialectics of race discrimination persist in the North, the role of ideological and repressive state apparatuses become more qualitatively distinctive as separately functioning institutions, and ideological state apparatuses are the dominant means of manipulation in the class warfare waged against the Mosses and the working community in the industrial setting. The issues of racism that were overt and foregrounded in the Southern setting slip into the background of the text and operate more covertly as part of the substructure of the Northern mill town culture. The novel depicts racism persisting in Northern culture; however, it is clearly different from the racism of the South, and it reveals fluidity in the conceptualization of race, of which variations depend on the exploitative relationships in the local culture. As the Mosses come from a violently racist culture, their individual ideologies reflect such violence and racism, as well as resistance to it. In the North, however, the Mosses are swept away by the currents of social recreations that are ritualized in a manner comparable to those described in Althusser's theoretical system. All the while, racist ideology continues to factor into policymaking in the North, as it is in the South, dictated by demands for labor. Although Attaway portrays a tenuous hold on authority by both repressive and ideological state apparatuses in contrast to Althusser's model, by showing the continuity from South to North of exploitative relationships that produce the Mosses' material conditions interconnected to institutionalized manners of thinking and corporal enforcement within Southern and Northern cultures, Blood on the Forge reaffirms as well as informs Althusser's theory through representations of the powerful yet tenuous influence of the state apparatuses, the dialectical clash of humanistic freewill, ideological determinism, and the deterministic effect of brute force in relation to institutionalized racism and labor exploitation of early 20th century America.