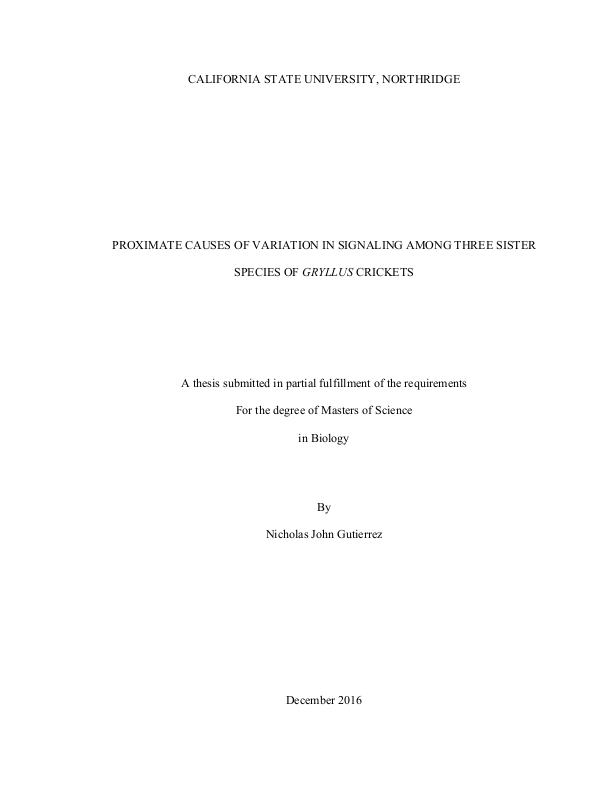 Mating signals play an important role in both mate selection and species recognition. Acoustic mating signals have been shaped under various evolutionary constraints with remarkable malleability in response to variable conditions. These same traits have been shown to serve as indicators of species identity and mate quality. But how will sexually selected signal traits be expressed as environmental conditions change and as species diverge? Using three closely related Gryllus crickets (Gryllus lineaticeps, G. personatus, and G. sp15/"G. staccato"), I assessed how components of male song (chirp rate, pulse rate, frequency, and pulses per chirp) and morphology responded to varying environmental dietary conditions within and among genetically structured family groups (sibships). Experimental diets had some effects on morphology with differences in mass and pronotum width in some species, but the diets had no effects on body condition or components of calling song, save one trait in one species. In contrast, sibship consistently affected chirp rate and frequency but did not affect pulse rate and pulses per chirp either within or among species. Interestingly, the dynamic song traits, chirp rate and pulses per chirp, exhibited broad variation in all species, as expected, but responded differently from each other to sibship. Likewise, the static song traits, frequency and pulse rate, exhibited limited within-species variation, as expected, but had different contrasting effects of sibship. Overall genetic variation in song traits was most strongly associated with species divergence, and then with dam but not sire effects within species. Overall, these results suggest conservation across species of the major sources of within-species song variation; that is, divergence among species appears to be associated with changes in the average values of song traits, especially static ones, but not consistent divergence in the sources of within-species variation.