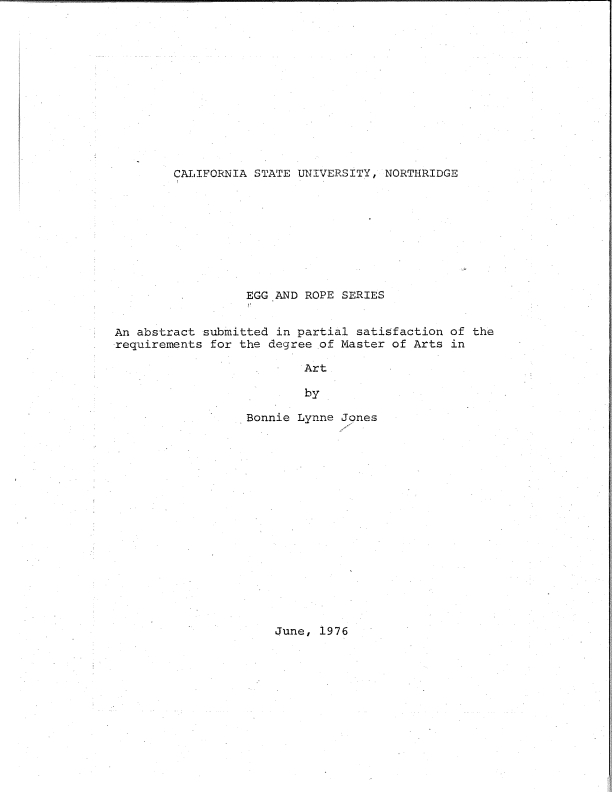 The "Egg and Rope Series" evolved as a synthesis of ideas, conscious and unconscious, molded into an expression through a conceptual and physical act, involving materials, space and time. My intention was to utilize two seemingly unrelated objects, the egg and the rope, and create a multileveled visual perception of them. These particular objects were chosen not through an entirely explainable or logical process. On the surface, one could say that the egg is visually appealing; it is elliptical and smooth, yet tactile and fragile. Like all great works of art, it has a soul and meaning transcending its physical manifestation. More than simply fascinating as a design package and source of food, the egg is a potent symbol that few can match in its complexity. It is an omen involved with the mystery of creation. Primitive and ancient people ascribed magic powers to the egg. Finally, an egg is like a germ or seed of an idea; it can imply growth, life or death, depending on how it is used in connection with other elements and symbols. The second predominant image in this series is that of the rope. Visually ropes are appealing because of their regular curves and rough texture. This material, made of strands of fibers braided together, can function as a support or it can be used to pull, suspend, fasten, separate, drape, anchor, tie together or hang. Symbolically, it can be used either positively, as a supportive element, or it can be used as a threat, symbolizing danger, as in the hangman's noose. Because of the functional possibilities and the literal implications, this can become a powerful symbol--especially, in conjunction with the egg. (See more in text)