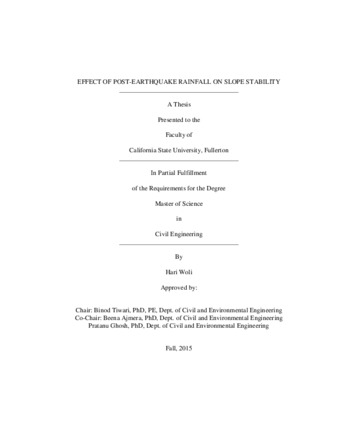 Global warming is a big concern these days all over the world including in the USA. It has said to trigger landslides all over the world every year due to the global warming. Landslides can damage the structures and block roads and rivers that require much effort and finances to repair. On 11 March 2011, an earthquake with magnitude 9.0 (Mw) occurred in Tohoku, Japan. Approximately 15,893 people were killed, 6,152 people were injured and much of the infrastructure was damaged. Hundreds of landslides occurred at that time. Recently, an earthquake with magnitude 7.8 occurred on 25 April 2015 in Gorkha, Nepal, west of the capital Kathmandu. A major aftershock with magnitude 7.3 occurred on 12 May 2015 near Kodari, east of Kathmandu. As a result of both of these major earthquakes, more than 9000 people were killed and thousands of landslides occurred in various parts of the country. Both earthquakes occurred in the dry season, and hence, a major concern was the increased likelihood of landslides in the rainy season following these earthquakes. This research describes the effect of post-earthquake rainfall on slope stability by examining the landslide distribution pattern in Nepal, following the 2015 Gorkha Earthquake and its aftershocks. A high resolution Google Map was used to locate the landslides triggered in the eastern to mid-western part of Nepal following the earthquake and after the first rainy season. A landslide database was created and contains the angle of inclination, features at risk and landslide area for each landslide identified. To evaluate the stability of slopes following a post-earthquake rainfall event, a 45º slope was modelled in a Plexiglas container and subjected to shaking on a shake table and rainfall in the laboratory. A clayey soil obtained from Mission Viejo, CA was used to prepare a slope model with void ratio 1.2. The slope was instrumented with accelerometers, tensiometers, and copper wires to record acceleration, pore water pressure and deformation of the slope, respectively. A series of sinusoidal waves with 20 cycles at various amplitudes and frequencies (0.1 g, 0.2 g, 0.3 g and 1 Hz, 2 Hz, 3 Hz) were applied to the slope model. After the seismic loading was applied, a rainfall simulator was placed on top of the slope and used to apply rainfall with an intensity of 16.8 mm/hr. The water front from the infiltrating rainwater was marked on either side of the Plexiglas container at different time intervals. Slope instability was not observed during the post-earthquake rainfall event. This was attributed to a decrease in the void ratio due to the seismic shaking leading to a reduction in the seepage rate for the rain water and lower pore pressures on the slope. Hence, the likelihood of further slope instability in the rainy season following an earthquake decreases. The results were verified in the case study from Nepal as there were no reported landslides during the rainy season immediately following the 2015 Gorkha Earthquake and its aftershocks.