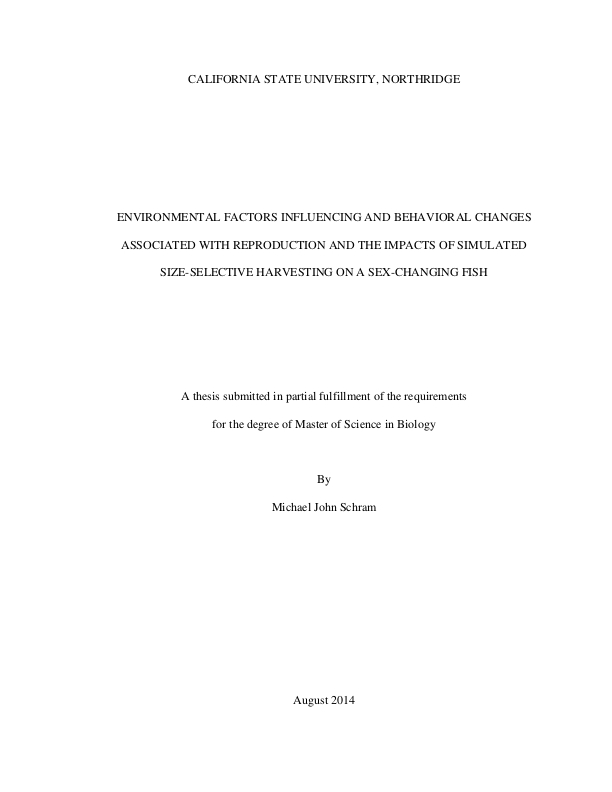 Overfishing has led to significant declines in worldwide fish stocks, particularly large bodied species. Contemporary management attempts to mitigate fishing effects to ensure the sustainability and accessibility of future fish stocks. A typical approach in fisheries management is to set size-limits, which focus fishing pressure on specific size-classes, a practice known as size-selective harvesting. Minimum size-limits are common, placing fishing pressure on the largest most fecund size-classes. In many sex-changing species, the largest size-classes are composed of a single sex. In the case of protogynous hermaphrodite species (those with female to male sex change), a few large males dominate harems of females. Size-selective harvesting therefore becomes sex-selective and has the potential for putting these types of species at risk for overfishing. Observational studies have noted life history changes in harvested protogynous species that correlated with fishing pressure, but controlled manipulative studies demonstrating causal effects of size-selective mortality have not been conducted. I used the blackeye goby (Rhinogobiops nicholsii) as a model species to test the effects of size-selective mortality. Because harvested species are not amenable to controlled manipulation of replicate populations in the field, use of similar model species may be the best approach to gain an in depth understanding of the effects of size-selective mortality on the ecology, reproductive characteristics, behavior, and life history of sex-changing species. Several aspects of the reproductive ecology of the blackeye goby, however, were unknown. My work aimed to (1) identify the factors influencing the reproductive patterns of the blackeye goby and (2) test the effects of simulated size-selective harvesting on their reproduction and growth using a field experiment. To conduct this work, twenty 2.25 m2 artificial reefs were built and stocked with natural densities of blackeye gobies. To determine the environmental characteristics influencing and behavioral changes associated with reproduction in blackeye gobies, I measured reproduction in artificial nests from weekly photographs. Photographs were taken for two months to test for the presence of a lunar cycle in blackeye goby reproduction. Temperature loggers were used to determine the effect of temperature on blackeye goby reproduction. Behavioral observations were made to explore whether behavior of three size-classes (male, female, and juvenile) changed when eggs were present on a reef versus when they were absent. Neither lunar phase nor water temperature were found to influence reproduction of the blackeye goby. The lengthy pelagic larval duration of the blackeye goby likely minimizes any potential fitness gains that could be obtained by timing reproduction with small-scale local variation in environmental factors. Rates of behavioral expression were unaffected by the presence of eggs on the reef. The persistent social dominance hierarchy exhibited by blackeye gobies may allow dominant, nest-guarding males to maximize their reproductive output without any behavioral changes. To test the effects of size-selective removals, populations of blackeye gobies were subjected to one of three size-selective removal treatments that reflected typical size-based management protocols (minimum, slot, and maximum size-limits) and these were compared to a control treatment with no removals. Reproductive output was measured on each reef, and individuals were tagged to track growth and sex change over the study period. Population densities were reduced by ~25%, which is a conservative reduction relative to known effects of fishing on population densities, but which ensured that not all individuals of a single sex were removed from any reef. The size-selective removals had no effect on reproductive output, growth, or incidence of sex change of blackeye gobies. The flexibility in social dynamics likely provides protogynous species the capacity to buffer modest losses of individuals from their populations. Future research incorporating additional species and a wider range of removal intensities and frequencies would provide additional insight into the impacts of size-selective harvesting on protogynous species.