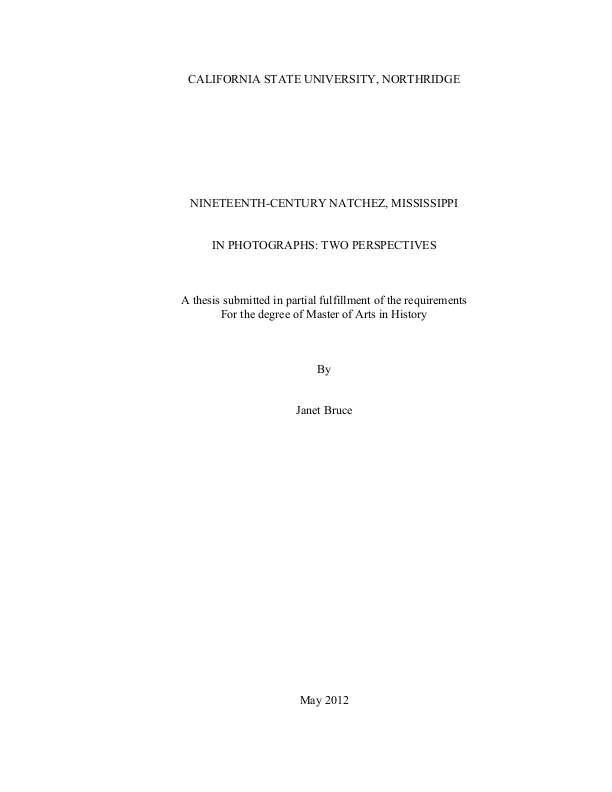 This study maintains that photographs expand and clarify the history of late- nineteenth-century Natchez, Mississippi in ways that documents alone do not. Visually, they reveal details and perspectives that are often overlooked in textual form. In the process, they personalize history by connecting their viewers intellectually and emotionally with the people, places, and events they represent. In so doing, they help to clarify how the past shapes and influences the present. Photographs also reveal the visions, intentions, and perspectives of their creators. This thesis will focus specifically on the late-nineteenth and early-twentieth century photographs of the Natchez, Mississippi photographer Henry C. Norman, whose work represents a forty-year timeline of daily life in the small, Southern, river city. The details in Norman’s images often demonstrate small nuances and contradictions, and may reveal powerful dichotomies of race, class, and gender. The study will focus, too, on the work of Thomas H. and Joan W. Gandy, Natchez residents who owned a collection of some 60,000 images created by Henry Norman, his predecessor, Henry Gurney, and Norman’s son and successor, Earl M. Norman. The Gandys were particularly drawn to Henry Norman’s work, and devoted significant time and energy to presenting their interpretative studies of it in both book and exhibit form. They worked especially to raise awareness of the images’ importance as visual history, rather than simply as illustrations or art. Their efforts both benefitted historians and actively supported the city of Natchez, which, despite an abundant textual history, depends heavily on visual history for its economic wellbeing. Henry C. Norman and Thomas H. and Joan W. Gandy effectively collaborated to create a collection of photographs that bridges different eras, and visually broadens, enhances, validates, and even corrects the understanding of Natchez history during the last decades of the nineteenth century and the beginning of the twentieth.