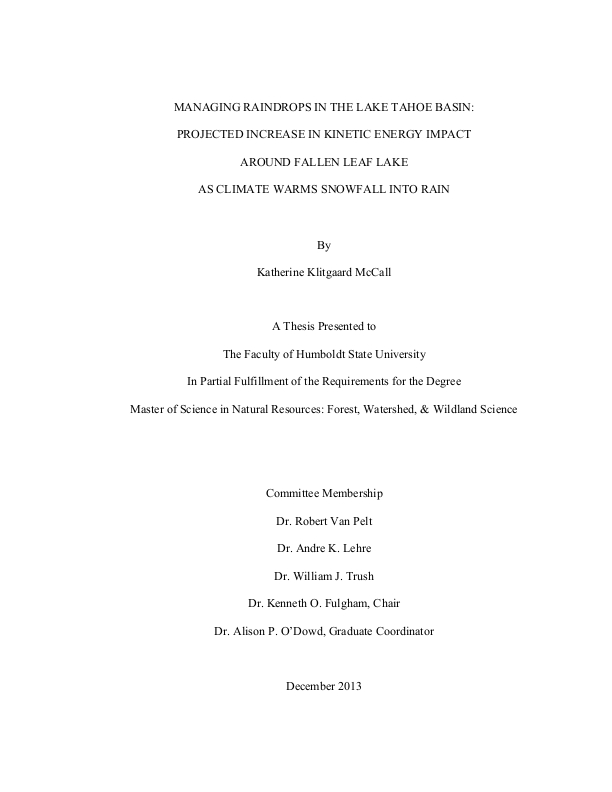 With last century’s observed linear warming trend of minimum daily air temperatures in the Lake Tahoe Basin extrapolated to the year 2060, the conversion from snowfall to rain and the associated increase in kinetic energy impact around Fallen Leaf Lake was estimated. Kinetic energy from falling raindrops imparts a force that dislodges particulates and initiates erosion and fine-sediment transport to streams and lakes. Regional management identified fine sediment as a key pollutant causing the decline in Lake Tahoe’s clarity, with most transparency lost by light reflected from those particles less than 8 μm in diameter. Decadal-scale monthly mean minimum air temperatures were calculated from weather data observed at the Natural Resources Conservation Service Snowpack Telemetry (NRCS SNOTEL) weather station, Site 473, located at Fallen Leaf Lake, for water-years 2000-2010. Elevation-adjusted percentage estimates, from ClimateWNA-modeled air temperature and precipitation data, were used to determine monthly precipitation presently falling as snow. Recorded dates of zero snowpack depths determined the median dates when exposed soil would be anticipated. The previously-developed mathematical correlation between hourly precipitation and kinetic energy impact was a power equation, when intensities were at least 10 mm/hr and less than 20 mm/hr, and a linear equation, when intensities equaled or exceeded 20 mm/hr. The linear ratio of hourly rainfall intensity to kinetic energy impact is 10:12. Due to intangible numerics for future hourly-intensity patterns and the extent of snowpack recession and the relationship of intensity to the projected increase in the amount of annual rainfall, kinetic-energy impact projection is an indirect metric of change. Another indirect metric is the relationship between increases in kinetic-energy impact and a net increase in fine-sediment transport into Lake Tahoe. Increased intensity is synonymous with an increase in raindrop diameters found within the event drop-size distribution. Increased drop-sizes correlate to an increase is soil erosion losses, as measured in the concentration of soil measured in runoff, by as much as 1200 percent. In inter-rill erosion, the direct impact of raindrops on soil, or a thin layer of water over the soil, initiates soil detachment. The kinetic energy of falling raindrops at terminal velocity is from one to two orders of magnitude greater than that of flowing water. Within these constraints and at monthly levels of resolution, the projected increase in kinetic energy impact around Fallen Leaf Lake was 9 percent, using median snowpack dates, and 24 percent, if later autumn snowpack accumulation and earlier spring snowmelt dates are considered, by five days at the ends of November and March. Regional land and water resource managers will find this possibility one to address, perhaps choosing to restore developed lower-elevation meadows and stream wetlands. Possible compensatory measures include trapping sediment from the Upper Truckee River, deepening the 11 miles of canals in the Tahoe Keys to create an environment too cold for algae, and eliminating non-native fertilized plants in landscaping. Eminent domain of pollution sites and sensitive lots has precedence. Reverting ownership of the Tahoe Keys back to the U.S. Forest Service and restoring Pope Marsh could be the cost-effective and environmentally-efficacious improvement program for restoring Lake Tahoe’s pristine clarity.