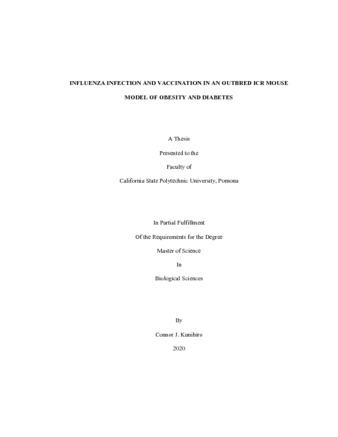 It is suggested that obesity and diabetes may exacerbate influenza infection and impact the efficacy of vaccination against influenza. The association between these conditions and more severe infection was not reported prior to the 2009 pandemic and have been weak since then. To complicate our understanding, mouse studies have yielded conflicting data and most of the current investigations into this connection are done using inbred mouse strains, which do not reflect the heterogeneity in humans with obesity and diabetes. Here, we characterized an outbred mouse model of obesity and diabetes that we used to investigate severity of influenza infection and differences in vaccine efficacy in the context of these comorbidities. Obesity was established in male ICR mice via a high-fat diet (60% calories from fat) for 1 month followed by injection of streptozotocin (STZ) and nicotinamide (NA). STZ selectively destroys the insulin-producing beta cells in the pancreas, while NA partially protects them to maintain some insulin production. We verified that mice on the high-fat diet weighed significantly more than mice on the standard diet (40-45g versus 30-35g), that STZ/NA treatment caused diabetes (4-hour fasting blood glucose > 200mg/dL), and that serum insulin in diabetic mice was low, but non-zero, which indicates that the model is similar to late stage type 2 diabetes in humans. We then established optimal lethal doses of H1N1 or H3N2 in obese only, obese diabetic, and lean non-diabetic mice. In early pilot studies, it was suggested that obesity may significantly delay mortality compared to lean non-diabetic mice (~1 day). In a more rigorous follow up study, obese diabetic mice survived the longest (again ~1 day), but there were no differences in weight loss, symptom severity, lung viral burden, or lung cytokine levels between any of the groups at any time point measured (d0, d4, d6, d8). This suggests that in this model, neither obesity nor diabetes exacerbate influenza infection. In a separate study, lean non-diabetic male and female ICR mice were vaccinated with different influenza vaccines. The vaccines were composed of liposomes containing the well-conserved ectodomain region of the influenza ion channel protein M2 (M2e) conjugated to membrane-bound maleimide and one of two membrane-bound adjuvants: monophosphoryl lipid A (MPL) or Pam3CAG. No ICR mice vaccinated with M2e-MPL or M2e-Pam3CAG generated antibodies or survived challenge. In previous studies in our lab, these vaccines have protected BALB/c and Swiss Webster mice, so the next study was designed to determine why these vaccines were not protective in ICR mice. Female BALB/c and ICR mice were vaccinated with M2e-MPL, a UV-irradiated whole virus vaccine (UV-Vax) or PBS. M2e-MPL vaccination generated strong immune responses in BALB/c mice (100% survival), but not in ICR mice (14% survival). UV-Vax did not protect against challenge, which was thought to be because the viral titer used to make the vaccine was too dilute. This experiment suggested that there are likely differences in mouse strains that explain why M2eMPL and M2e-Pam3CAG were not protective in ICR mice (perhaps genetics or weight/vaccine dose). In conclusion, we have demonstrated that in this outbred ICR mouse model of obesity and diabetes, H1N1 influenza infection is not exacerbated by obesity or diabetes and we have carried out pilot vaccination studies using ICR mouse model to study how obesity and diabetes impact efficacy of vaccination.