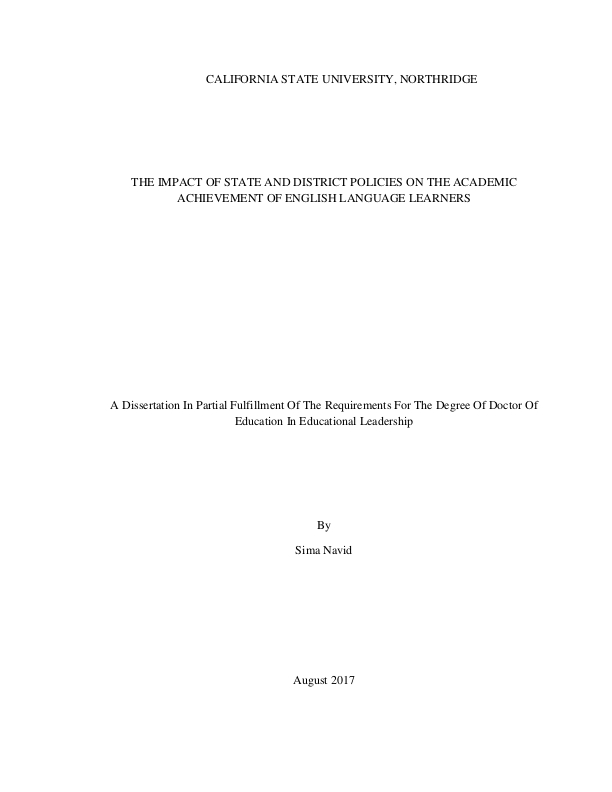 Abstract THE IMPACT OF STATE AND DISTRICT POLICIES ON THE ACADEMIC ACHIEVEMENT OF ENGLISH LANGUAGE LEARNERS IN URBAN SCHOOLS By Sima Navid Doctor of Education in Educational Leadership and Policy Studies The purpose of this study was to explore the impact of state and district policies on English Language Learners' academic achievement in urban school classrooms. At the same time, a goal of this study was to examine whether state and district policies hinder or support the academic achievement of English Language Learners in classrooms. Latinos comprise the majority of California's school age population. At the same time, they have the lowest graduation rate and highest dropout rate for students in high schools. The education of Latino English Language Learners (ELLs) must be a priority for educators and lawmakers. The Common Core State Standards require students to use academic language while actively participating in classroom discussions and take the same standardized assessments as their English speaking peers. On the other hand, The English Learner Master Plan requires students with the same English proficiency level to be placed in classrooms together all day for the entire school year. Based on the findings of this study, it is recommended that English speaking role models are needed in order for ELLs to gain English language skills and academic vocabulary. Therefore, keeping low-level ELD students in classrooms with peers of the same English proficiency level does not increase academic achievement. The Structured English Immersion (SEI) classrooms do not support the academic language and vocabulary of ELLs. The ELL students need other English speaking role models such as ELD 5s, Reclassified Fluent English Proficient (RFEP), Initially Fluent English Proficient (IFEP), and English Only (EO) students to demonstrate the correct grammar and academic English.