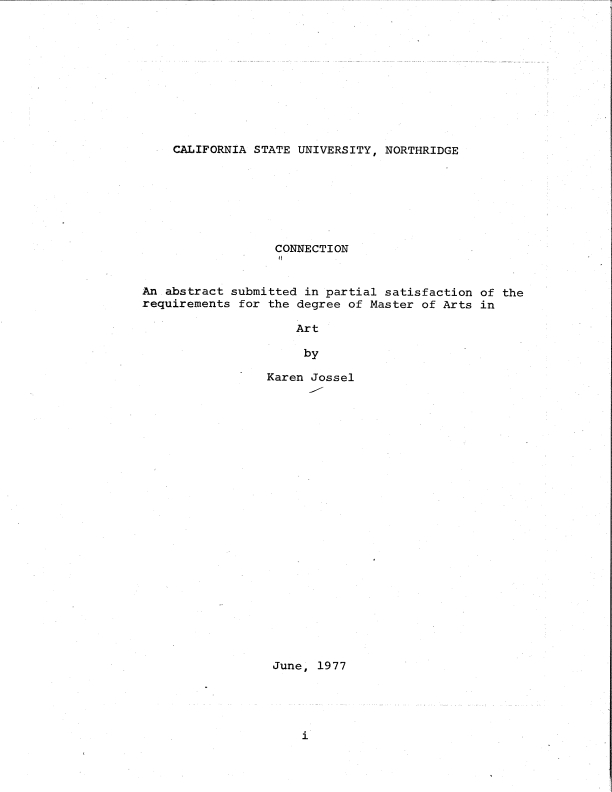 My thesis show was titled Connection, and took place from October 18-22, 1976, in gallery II at California State University, Northridge. The gallery space was divided into two main sections. The first, the entrance hall, was a piece in itself, consisting of 35,000 pins sticking through black walls, points out, in a menacing way. This led into the second section which was a standard white gallery space with twelve individual pieces placed around the room. The contrast between the entrance hall, dark and threatening, and the rest of the gallery space--white, light and safe, was intended to - give a clue to the basic premise of the show, which was to combine contrasting elements in a new and stimulating way. In the individual pieces, I attempted to demonstrate that the conjunction of opposing or contradictory elements can produce new and powerful expressive meanings. In order to enhance this effect, I used materials and forms which are familiar to most people and already have strong meanings and associations. The reason that the show was called Connection is because the needle is used as a primary visual element, and is intended to refer to the drug sub-culture, and all the inherent contradictions found in drugs. Drugs are at once seductive and repellent, creating expectations of pleasure and release, but ultimately ending in pain and disillusionment. However, the show was not just about drugs and the conflict between expectations and reality, but is a metaphor for our experience in the world in general. There are contradictory elements in all aspects of our existence, and the awareness of hidden dangers lurking beneath seductive surfaces is necessary for survival itself. This awareness of the simultaneous existence of contradictory elements, and the deceptive situations with which we are constantly confronted, is primary to the content in Connection.