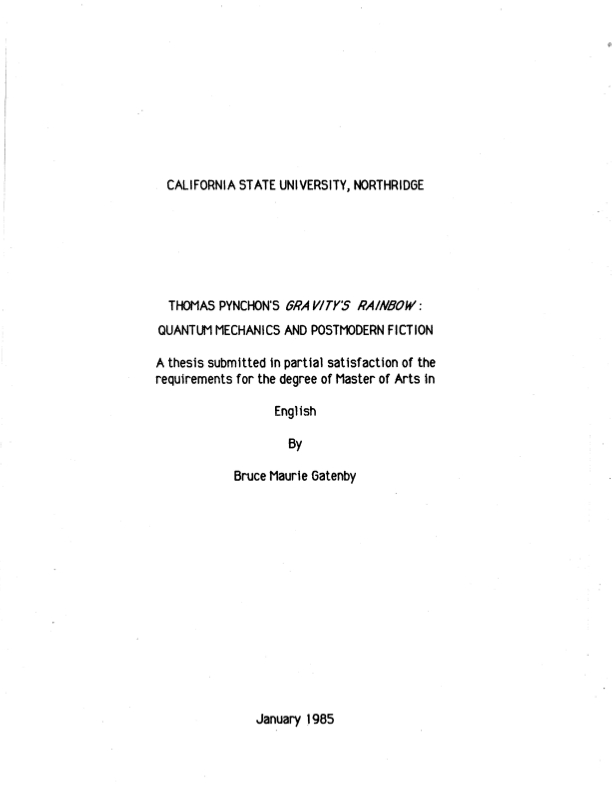 Postmodern American fiction differs from the Modernist tradition of Faulkner, Joyce, Woolf, and Fitzgerald in that it deals with “multiple realities.” While Modernist writers questioned the reliability of a narrator's perceptions, an underlying reality such as Joyce's Dublin still existed to validate the reader's perceptions. With Postmodern fiction, however, this reality is gone, reflecting the fracturing of American experience into multiple realities, an observation supported by contemporary psychology and physics as well. Thomas Pynchon is the paradigm of the contemporary fiction writer. His major work to date, Gravity's Rainbow, dealing with this idea of multiple realities, has become the subject of more critical writing than any novel since Joyce's Ulysses. However, Pynchon critics still view this work as a Modernist text, interpreting his characters as failed questers, unable to reach any epiphany or revelation about the contemporary world. Using the world of quantum mechanics as literary metaphor, Pynchon has adopted the idea of transformation, as found in particle physics, as his theme. Viewing his work through the traditional notions of Newtonian physics only leads to the conclusion that Pynchon's characters are doomed to failure in a pre-determined world ruled by the Second Law of Thermodynamics or entropy. However, when read as an expression of the quantum mechanics point of view, Pynchon's work presents a life-affirming message of the possibilities inherent in the idea of transformation. This is most evident in Gravity's Rainbow. While most critics have given it a “doom and gloom” apocalyptic reading, a positive reading emerges when the novel is interpreted through the point of view of quantum mechanics. Tyrone Slothrop, the “failed” hero of the novel, becomes the embodiment, not of failed revelation, but of the quantum concept of transformation, especially at the end when he disintegrates into the very world of particle physics from which Pynchon derived his quantum metaphor.