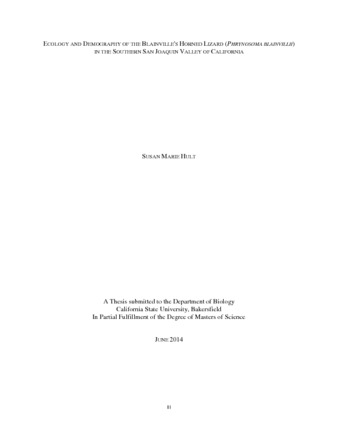 The Blainville's Horned Lizard (Phrynosoma blainvillii) is endemic to California and ranges from northern California (Butte County), to the northwestern tip of Baja California in the southern part of its range, west of the Sierra Nevada Mountains and the southern California deserts in the eastern part of its range, and along the Pacific coast from northern Baja California to Monterey, California in the western part of its range. Phrynosoma blainvillii is listed as a California Species of Special Concern and a Bureau of Land Management (BLM) Sensitive Species. Human activities have been primarily responsible for declines in populations. There has been few field research studies published on the general ecology of P. blainvillii, particularly in the San Joaquin Valley. I initiated a radio-telemetry study to collect data on home range size and habitat use at two sites (Atwell Island and Semitropic Ridge Preserve) in the southern San Joaquin Valley, California. I calculated home range size from 10 lizards, five at each site. Using the 100% Minimum Convex Polygon (MCP) estimator I found home range sizes were between 0.58 ha to 13.93 ha, with an average size of 4.98 ha (± 1.54). When above ground and active, P. blainvillii at either site used areas of bare ground more often than expected based on equal use. At the Semitropic site, the lizards used areas under shrubs almost as often as bare ground, while at the Atwell site the lizards used areas of sparse vegetation more often than expected, but not as much as bare ground. Lizards at both sites used medium-dense and dense areas of vegetation much less than expected based on equal use. In adult P. blainvillii, we recorded a moderately skewed sex ratio of more males than females, but in young P. blainvillii, there were more females than males. Average snout-vent length (SVL) of females was 72.31 mm and for males 68.81 mm. The adult horned lizards were most active in April and May while young horned lizards were most active in August and September. In the spring, the morning activity hours peaked at 0900–1100, in summer, it was 0900–1000, and in fall, it was 0900–1300. All age classes of P. blainvillii were most often above ground and active at surface temperatures of 28–34°C. The presence of alkali flats and sandy soil correlated with a high abundance of horned lizards, and within our two study locations, they revealed a distinct preference for Sandridge loamy fine sand over other available soil types. The lizards used kangaroo rat burrows rather than shrubs for heat refugia but used shrubs frequently as an escape from predators. Food items found in scats were predominantly ants, but beetles and other arthropods were also found in large numbers.