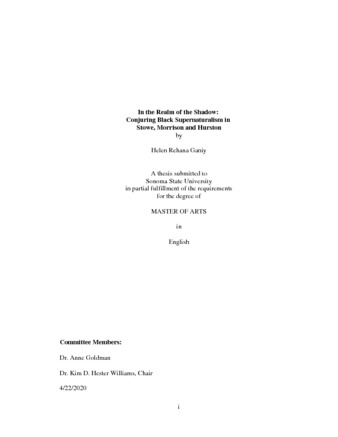 In the Realm of the Shadow: Conjuring Black Supernaturalism in Stowe, Morrison and Hurston

My thesis begins by interrogating the ways in which two texts by Harriet Beecher Stowe--Uncle Tom’s Cabin and its follow-up, Dred--construct Black supernatural ability as racially innate and divinely specific. Harriet Beecher Stowe’s notion of “Black spiritual superiority” invigorated racial tensions of the time and encouraged white reader’s hyperbolic notions of Blackness. The undisputed architect of the Magical Negro trope, Stowe’s creation forces the enslaved into a position to prove themselves superhuman; that is, the trope burdens their humanity with inhumane assumptions. To contemporize my discussion of Stowe’s work, I assert that her character, Uncle Tom, was the largest and most significant influence on the production of the Magical Negro, which has become highly visible in film and literature of the past half century. Additionally, the trope positions Black individuals as divided into two categories: ordinary criminals or supernatural creatures. Both of these assumptions deny Black humanity in the same way that black exceptionalism denies the existence of a human spectrum in the Black community. This polarization of types works to story the black experience into extreme poles, forcing perceptions of Blackness to recede back into “Uncle Tom-isms”, relegated into the space of characters, stereotypes and relics. Shifting from this historical perspective into a speculative lens, I argue that Toni Morrison’s Beloved and Song of Solomon disavow the Magical Negro by engaging with Black Supernaturalism - a term that denotes a literary phenomenon which seeks to rework dominant notions of Black religious participation and traditional African Voodoo. My work excavates Black Supernaturalism through the anthropological and fictional works of Zora Neale Hurston, whose work formed the foundation upon which Morrison, and other Black authors, built their work. Further, Black Supernaturalism certifies and upholds communal traditions that certify magical storytelling, ghosts and impossible feats as palpably sourced in the scars of slavery borne by the black community.