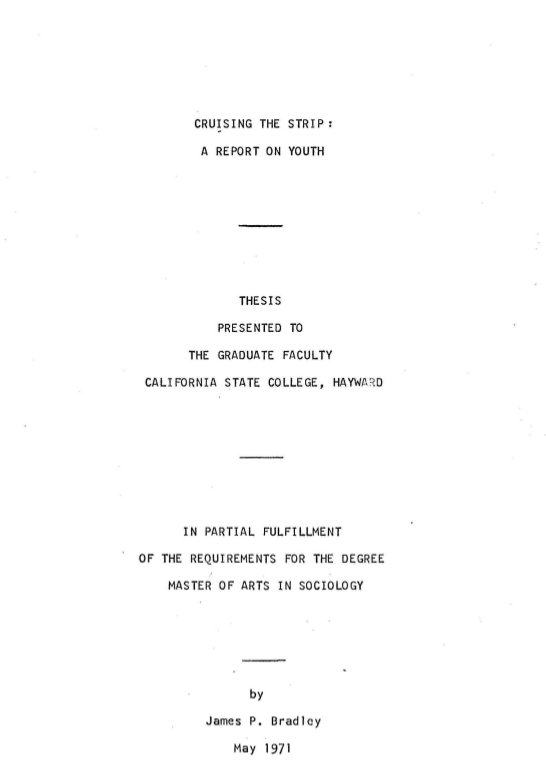 Cruising the Strip: A Report on Youth

Every Friday and Saturday night a short length of thoroughfare in San Leandro is jammed with kids and cars. About seven-thirty in the evening they begin to arrive, driving their polished and modified cars down the street to a particular intersection where they make a "U" turn. Heading in the opposite direction to another intersection, they make a second ''U" turn and begin the circuit again. The action reaches its peak about eleven-thirty when hundreds of cars are either being driven or are parked on this street. This is not a phenomenon peculiar to this city. It has been observed by this writer in Richmond, Walnut Creek, San Jose, Fresno and Long Beach, California; Portland, Oregon; and Seattle, Washington. In addition, it has been reported by others to occur in many other cities. (Information from an interview with Peter Laufer. KSAN Radio Station, San Francisco, Calif., re: a broadcast on Feb. 27, 1971.) In all of these cities, it is the same pattern. The phenomenon involves hundreds of young people each evening. Some of them spend a considerable part of their leisure time at this activity, several hours each evening, six to eight evenings each month. It is an important social activity for many young people, and as such is worthy of investigation. The activity itself at first glance seems to be universal among social classes. Upon closer examination, however, the phenomenon takes on the characteristics of two particular classes. The cars and activities, while fulfilling the needs of many youths, seem to fit the needs of upper lower and lower middle class youth in particular. These young people from the families of regularly employed workers and minor white collar employees have adopted the value system of their parents. The two groups will be considered by the writer as working class because the minor white collar family more nearly fits into the working class value system than into the middle class system. The participants of this study seem to exhibit the values of the working class. In addition, because self esteem and status are of such importance to young people it would fulfill some of the status needs for these persons who have not achieved in other areas. Underachievers, academically, or socially, might compensate for their lack of success by competing for status in the value system of the activity known locally as "cruising the strip."