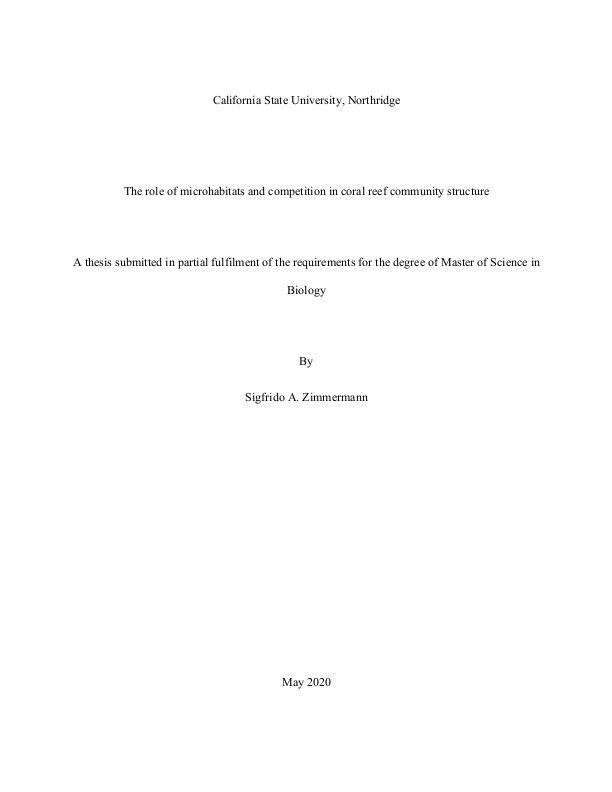 Role of microhabitats and competition in coral reef community structure

Scleractinian abundance has declined over the last few decades on most coral reefs. This reduction in scleractinian cover is associated with multiple types of disturbances including outbreaks of predators and diseases, mass coral bleaching, storms and overfishing of key grazers. Disturbances lead to dramatic changes in community structure that can lead to a phase shift of one group of dominant organisms by another. On coral reefs, such transformation can affect the abundance and community structure extending from a decline in abundance of scleractinians to an increase in abundance of sponges, octocorals, and most commonly, macroalgae. Coral post-settlement growth and survival, and competition are major forces driving community structure of coral reefs, both of which are essential in understanding the decline or recovery of scleractinian populations on coral reefs. This study examined the effects that microhabitats have on coral post-settlement growth and survival in the reefs of Moorea, French Polynesia, and the effects of competition between an aggressive peyssonnelid algal crust (PAC) on scleractinians and octocorals on the reefs of St. John, US Virgin Islands. Coral reefs of Moorea, French Polynesia have suffered several major disturbances over the last decade, from a crown-of-thorns seastar outbreak, Cyclone Oli, and bleaching events. However, coral populations on Moorea, specifically Pocillopora spp., have been able to recover within 5 years and theoretically are capable of producing sufficient larvae to support local recruitment following disturbances. In this study, I describe the results of an experiment designed to examine the distribution of juvenile Pocillopora spp. colonies in microhabitats across the back reef and to evaluate the roles played by microhabitats affecting juvenile coral growth. In 2017, juvenile corals growing at 3-m depth in the backreef were less abundant on crevice microhabitats (narrow-deep and shallow-wide) compared to no crevice microhabitats. Furthermore, juvenile corals calcified less in deep-narrow crevices compared to shallow-wide crevices. In the Caribbean, PAC has emerged as a possible threat to shallow coral reefs in the region. In 2010, PAC was documented in Lac Bay, Bonaire, where it rapidly spread and overgrew many sessile benthic organisms including scleractinians. PAC has also appeared in Puerto Rico, Jamaica, and the Virgin Islands. In this study, I describe the extent of PAC on shallow reefs of St. John, US Virgin Islands and its effects on other sessile benthic organisms. In 2015 along the south of St. John, PAC cover ranged from 0.2 - 20.6% of the benthos. By 2017 at the same sites, PAC covered 3.2 - 61.0% of the benthos. In August 2017 at 5-m depth at 10 sites, PAC cover was 1.4 - 61.6% and at 9-m depth, PAC cover was 0.8 - 41.0%. Scleractinians and octocorals were in frequent contact with PAC (42 - 47% of colonies), however scleractinians (74% of colonies) were more frequently being overgrown by PAC compared to octocorals (39% of colonies). St. John was struck by two category 5 hurricanes in September 2017, and total cover of PAC decreased from 26% in August 2017 to 23% in November 2017. The present study shows that PAC may have a large impact on the community structure of shallow Caribbean reefs, accentuating the trend of community shift from scleractinians to macroalgae.