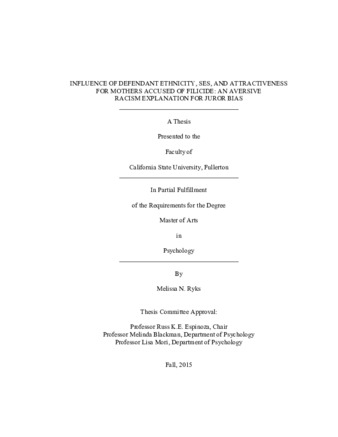 Influence of Defendant Ethnicity, Ses, and Attractiveness for Mothers Accused of Filicide: An Aversive Racism Explanation for Juror Bias.

The theory of Aversive Racism is often used to explain the contemporary prejudice being displayed towards racial minority defendants in the U.S. criminal court system. This form of contemporary racism is characterized by its subtleties; the aversive racist is sympathetic to past injustice, supports equality, and believes themselves to be non-prejudiced, but all the while harbors subtle and sometimes subconscious negative feelings and beliefs. The purpose of this study is to examine if aversive racism can best explain juror decision-making biases when race, socioeconomic status (SES), and attractiveness of the defendant are varied for mothers who are charged with killing their child. To date, no known research has examined juror decision-making when these sociocultural factors are varied. In a mock juror study, 375 participants were randomly assigned to one of 12 conditions in a 3 (ethnicity: European-American, AfricanAmerican, or Hispanic), X 2 (SES: high or low), X 2 (attractiveness: attractive or unattractive) between groups design. After reading a case transcript, participants were asked to provide a verdict, recommend a sentence, answer various culpability questions, and rate the defendants on a number of trait ascription characteristics. Participants also provided personal demographic information such a race, gender, age, etc. Based on previous research it is hypothesized that minority, unattractive, and low SES mothers will be found guilty significantly more often, receive lengthier sentences, be found more culpable, and be rated more negatively on trait ratings compared with European-American, attractive, and high SES defendants. Results demonstrated partial support for the proposed hypothesis. Significance was observed for sentence, with participants giving minority, low SES, and unattractive defendants lengthier sentences. Significant interactions were also observed for various culpability ratings. Limitations and future directions will be discussed.