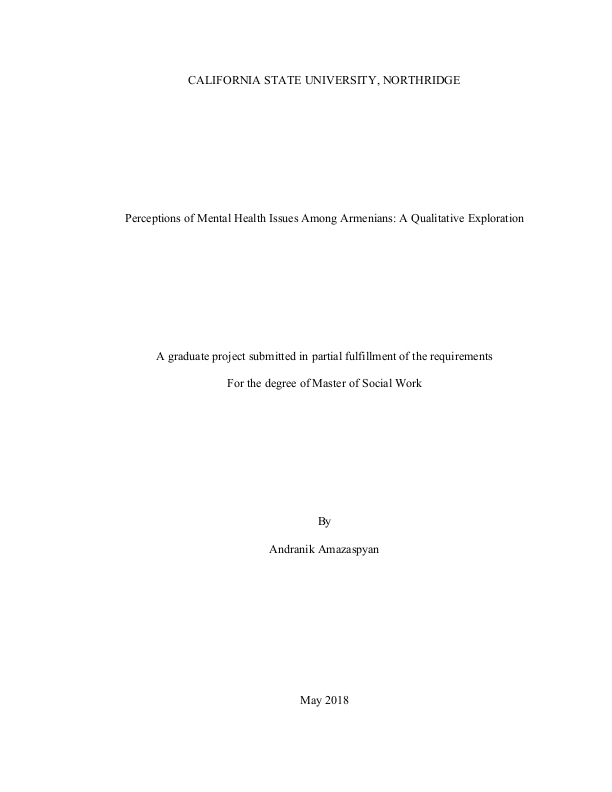 Perceptions of Mental Health Issues Amongst Armenians: A Qualitative Exploration

Despite the established benefits of mental health services, ethnic minorities experience barriers such as cultural stigma, reluctance, inadequate access, and poor quality of treatment when seeking mental health treatment (Rugema et al., 2015; Nami, n.d.). Even with the emergence of evidence-based practice and research, psychiatric and mental health facilities developing countries, for example, Armenia, continue to use outdated soviet laws designed to punish and isolate persons with mental health disorders (Grigoryan, 2015). As members of the Armenian community migrate into other countries, for example, the United States, they are likely to bring their cultural beliefs, values, and norms with them as well. The current study will focus on the perceptions of mental health issues of Armenians living in the United States of America, specifically in Los Angeles, California. Given their history of oppression and genocide, and to reduce the transmission of potential generational trauma onto future decedents, the Armenian community would likely benefit from mental health services. However, due to the cultural stigma attached to mental health issues, this group is less likely to utilize these services (Siegal, 2013). This qualitative study aims to explore the perceptions of mental health issues amongst Armenian adults between the ages of 22 and 29 years old living in Los Angeles, California. The purpose of the current study is to raise awareness about mental health issues among the Armenian American community, reduce mental health disparities, and assist in the development of culturally competent interventions. Three themes emerged from the current study: The preservation of the Armenian identity, barriers to mental health treatment, and the mental health help-seeking process.