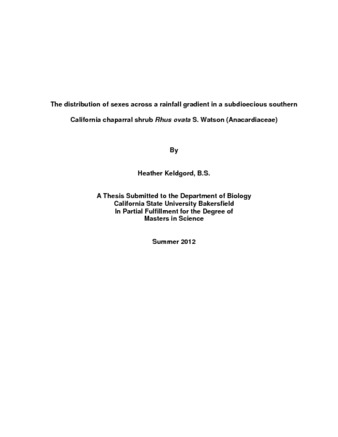 The Distribution of sexes across a rainfall gradient in a subdioecious southern California chaparral shrub Rhus ovata S. Watson (Anacardiaceae)

Rhus ovata is an evergreen shrub species that is common to low elevations in southern California. This species is subdioecious, i.e. some individuals are functionally females and produce fruit while others are functionally male and produce flowers with pollen. I hypothesized that because female plants allocate greater resources to reproduction through the formation of both flowers and fruit, female plants have fewer resources available for vegetative growth, survival, and defense. Therefore, I predicted that female plants would be smaller and less competitive. I sampled Rhus ovata populations at six sites across a rainfall gradient (221mm/yr to 701 mm/yr) and predicted that populations would be male dominated at drier sites because of their greater stress tolerance. At each site I measured the ratio of male to female plants within the sampled population. For a subset of individuals at each site, I measured crown size, stem tissue density, specific leaf area, reproductive investment, and distance to the nearest neighbor. As expected, female plants had greater total reproductive investment although the amount of investment was highly variable and females exhibited more variability than males. However, this differential reproductive investment did not lead to sexual size dimorphism. Ratios of functional male plants to functionally female plants differed among sites, but these differences were not correlated with rainfall and across sites the ratio of males to females did not significantly differ from a one to one. Plasticity in allocation to reproduction among females in this long-lived woody species may mitigate reproductive costs and reduce sexual dimorphism.