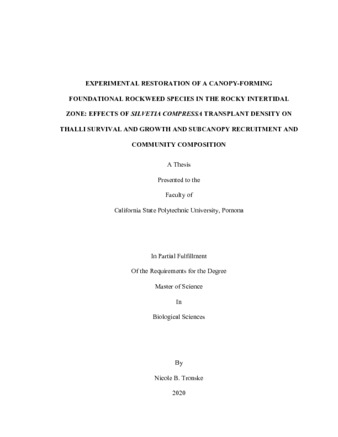 Experimental Restoration of a Canopy-Forming Foundational Rockweed Species in the Rocky Intertidal Zone: Effects of Silvetia Compressa Transplant Density on Thalli Survival and Growth and Subcanopy Recruitment and Community Composition

Rockweeds (Phaeophyceae, Fucales) are brown seaweeds that dominate temperate rocky intertidal and shallow subtidal habitats. These autogenic ecosystem engineers facilitate high diversity through provision of a canopy that ameliorates desiccation and thermal stress during emersion. In many parts of the world, however, rockweeds are declining. Given their declines and ecological importance, combined with low dispersal distances that limit recovery, rockweeds are strong candidates for restoration efforts. However, more research needs to be conducted to elucidate best restoration approaches and whether re-introduction or population enhancement of canopy-forming seaweeds results in cascading community changes. In southern California, the rockweed, Silvetia compressa has declined at numerous sites along the coast. Experimental transplantation of Silvetia has been conducted previously but the effects of restoration on subcanopy community composition and recruitment and the impact of transplant density was not examined. Consideration of transplant density may be particularly important as Silvetia naturally creates high-density beds with overlapping canopies, likely facilitating self-recruitment and a diverse understory community. Therefore, the goal of my study was to examine the effects of transplant density on: a) outplant survival and growth, b) recruitment of Silvetia, c) recruitment of other algae and invertebrates, and d) understory composition. Adult Silvetia were taken from a nearby, abundant donor population and transplanted in three density treatments (1, 2, and 4 transplants in 0.09 m2 plots); controls with no outplants were used for comparison. A year following transplantation, survivorship of outplants was lower than natural populations at the donor site, mostly driven by early mortality likely due to transplant shock. Transplant density did not affect either survival or growth of outplants but there was an effect on recruitment of some taxa. Generally, recruitment of Silvetia, mussels, and red algae was enhanced in high-density treatments while barnacle recruitment was inhibited by canopy presence, with the highest recruitment in control plots. The subcanopy assemblage changed quickly after a canopy was introduced, as compared to the control plots with no outplants, but did not differ among outplant density treatments. Generally, the presence of a canopy increased the abundance of perennial algae and reduced the amount of bare space. My study provides support that restoration of Silvetia, and likely other rockweeds, can be successful via transplanting, that canopy provision can alter subcanopy communities, and that higher outplant density increased self-recruitment, vital for a persistent and growing population following restoration efforts.