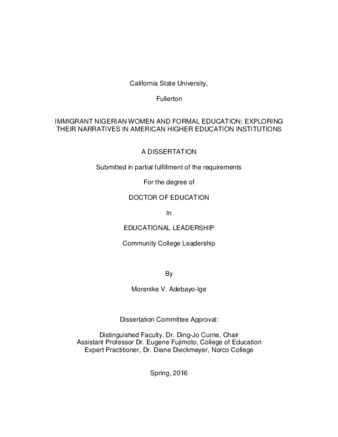 Many immigrant Nigerian women make the life changing decision to study in American higher education institutions in order to empower and improve their socio-economic status (Ojo, 2009). However, there is a paucity of research on immigrant African women and even more lacking are studies on immigrant Nigerian women. The few available studies on immigrant African women homogenized immigrant African women by painting them as a monolithic group, thereby overlooking the uniqueness of specific women from diverse African groups (Belenky, Clinchy, Goldberger and Tarule’s, 1986; Ogundipe-Leslie, 1994). As a result, the voices of immigrant Nigerian women are absent. Thus, the aim of this study was to fill a gap in literature concerning immigrant to project the voices of Nigerian women by exploring their experiences in American higher education institutions. This study examined factors that influenced participants’ educational success, the effects of higher education attainment on their lives, and the coping strategies they employed in navigating their pathways through American colleges and universities. Utilizing a narrative approach and Ogundipe-Leslie’s (1994) African feminism and Social Transformation Including Women in Africa (STIWA) as a framework, the findings revealed that immigrant Nigerian women’s success was influenced by support from families, peers, church (spirituality), and their self-determination. In addition, findings showed that participation in higher education resulted in financial stability and increased self-esteem/voice and a positive influence on others, as well as confrontation with discrimination. Participants cultivated various coping strategies, such as faith in God and focusing on their educational goal. The study concludes with recommendations for policy makers, educational leaders and faculty to embrace diversity by being more culturally sensitive to the needs of immigrant students and to hire more faculty of color to create a more equitable and inclusive teaching and learning environments (Bensimon, 2007; Jones & Jones, 2008; Turner, Gonzalez and Wood, 2008).