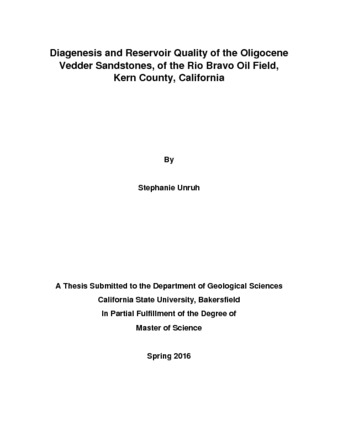 The Rio Bravo oil field is located about fifteen miles northwest of Bakersfield, California. The zone of importance is the Vedder Sandstone, which is about 1,250 ft (380 m) in thickness. The thin (<100 ft, 30 m) Miocene Rio Bravo sandstone, which unconformably overlies the Vedder Sandstone, is included in the main Vedder reservoir. Burial depths range from approximately 10,750 ft (3,277 m) to 12,450 ft (3795 m), with reservoir temperature at 248°F (120°C). These sandstones are presumed to be at or very near their deepest burial depths based upon temperature and burial comparisons of similar oil fields located on the east side of the San Joaquin basin. The mineralogy and lithology of Oligocene sandstones of the Rio Bravo oil field were examined using a petrographic microscope and a scanning electron microscope equipped with an energy dispersive x-ray spectrometer (SEM-EDS) and a cathode luminescence imaging system (SEM-CL). The Vedder Sandstones are medium-to fine-grain, subangular to subround, very poorly to well-sorted arkosic to lithic arenites deposited as shallow marine sandstones. Accessory minerals of the Vedder Formation include biotite, muscovite, zircon, hornblende, rutile, garnet, epidote, and magnetite/titanomagnetite. The diagenetic features affecting reservoir quality of the Vedder Sandstones include compaction, cementation, deformation, dissolution, recrystallization, and replacement of minerals. Porosity within the Vedder Sandstones is controlled mainly by compaction and dissolution of framework-grains. Compaction decreased porosity through ductile deformation of shale clasts, micas, and volcanics, which commonly were squeezed into adjacent pores to form pseudomatrix. Rotation and slippage of grains and fracturing of brittle grains were also widespread. Dissolution of framework-grains and carbonate cements created oversized and elongate pores and altered quartz:feldspar:rock fragments, and quartz:feldspar:lithics ratios.