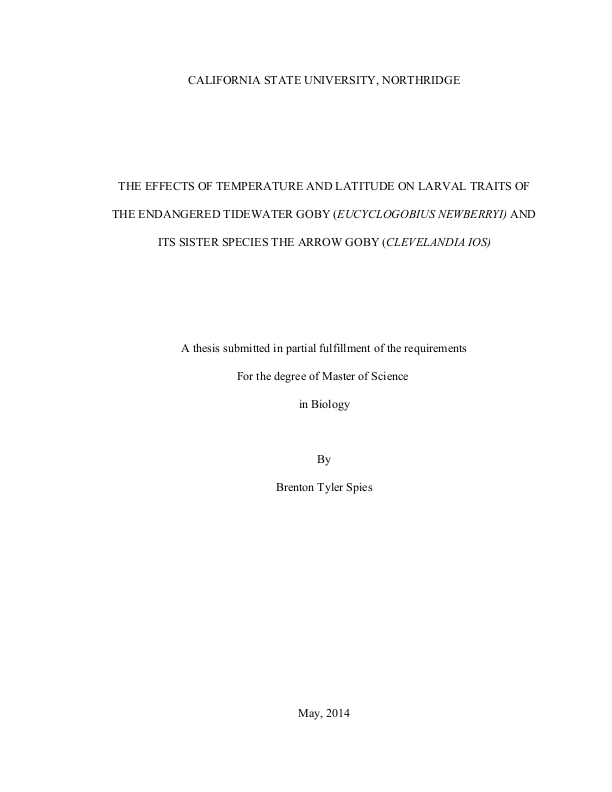 In benthic associated fish species, the time an individual spends in the larval phase until settlement to a benthic substratum is a vulnerable and critical period determining survival. In many species, the length of this period can strongly influence dispersal potential, further affecting a species geographic range, population connectivity, and community structure. The type of habitat in which a fish resides can significantly influence its larval development due to variations in the abiotic environment, such as temperature. In addition, the degree of habitat isolation can strongly influence dispersal potential, as seen in seasonally closed, or isolated, estuaries in California when compared to fully tidal marine estuarine systems. This study examines the variations in larval traits of two California endemic gobiid species found in differing estuarine habitat types. The arrow goby, Clevelandia ios, is commonly found in fully tidal bays, estuaries, and mudflats with consistent marine influence. The tidewater goby, Eucyclogobius newberryi, is the sister species to the arrow goby, and prefers estuaries and lagoons with some degree of seasonal isolation from the sea. This habitat preference exposes the tidewater goby to much greater temperatures and limits its dispersal potential. In the first part of this study, I used otoliths to examine the larval duration, size at settlement, and pre-settlement growth rates of newly settled gobies collected in eighteen estuaries along the California coast in the summer of 2011. I found that the arrow goby, on average, had a longer larval duration than the tidewater goby, but smaller size at settlement based on back-calculated size measurement. Additionally, larval growth rate of the arrow goby was slower than that of the tidewater goby. Although variations in larval traits between these two species were significantly different, they were much more similar than initially expected. In the second part of this study, I examined the effects of temperature and latitudinal distribution on the larval traits of the arrow and tidewater goby in eighteen study systems. Hourly temperature measurements were recorded in 18 study sites in order to determine the mean temperature experienced by each fish during its larval phase. Temperatures found in seasonally closed estuaries inhabited by the tidewater goby had greater variability among sites (10o C range) than the fully tidal marine sites inhabited by the arrow goby in (5o C range). Among site variation in larval traits was greater for the tidewater goby, likely linked to the greater temperature range of seasonally closed estuaries. On average, for both species, fish that experienced warmer temperatures had a shorter larval duration, faster growth rates, and were smaller in body size (SL) at settlement. Projected increases in global temperatures will likely accelerate larval development for many species. For the arrow goby, tidewater goby, and related estuarine species, this can either be beneficial or damaging depending on local habitat conditions and community structure. A decrease in larval duration could potentially reduce dispersal distance and gene flow between populations. However, decreases in larval duration could potential increase the rate of survival to settlement by reducing predator exposure. This would, in turn, decrease the size at settlement, which could prove to be detrimental in populations where a larger body size at settlement gives a greater competitive advantage in the juvenile stage. Therefore, further knowledge on the effects of temperature on endemic species can be useful for planning conservation and management strategies in the face of climate change