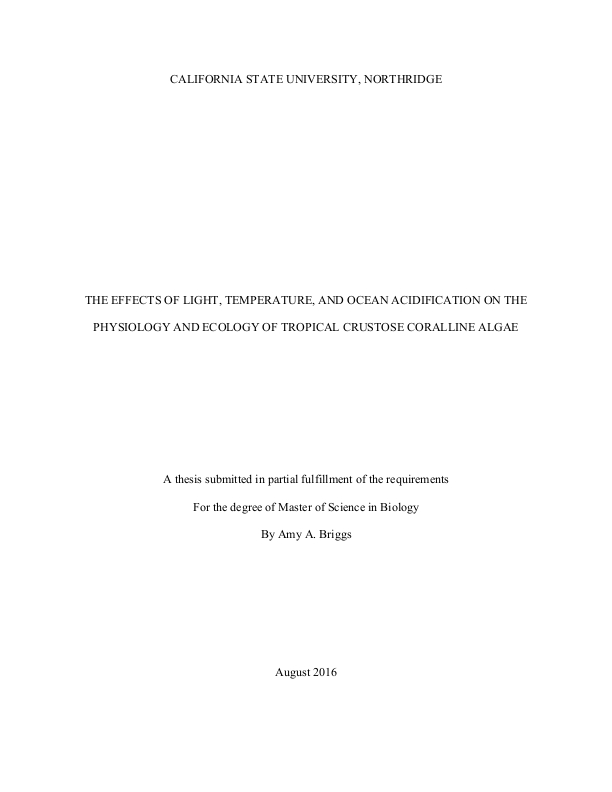 Effects of light, temperature, and ocean acidification on the physiology and ecology of tropical crustose coralline algae

In the oceans, changes in seawater carbonate chemistry associated with increasing atmospheric concentrations of carbon dioxide (a process referred to as ocean acidification, or OA) is predicted to have significant effects on many marine species, particularly ones that calcify and/or photosynthesize. The effects of OA on these groups likely will be modulated by other environmental factors such as temperature and light. Understanding how these factors (which vary across different spatial scales within marine ecosystems), will interact with OA to influence calcifying autotrophs is important to inform predictions of how species distributions and community structure will shift under future OA and climate change. Thus, to explore the effects of temperature and light on the response of calcifying autotrophs to OA, this thesis investigated how temperature, light, and their interactions with OA affect the physiology and ecology of crustose coralline algae (CCA) found in Pacific coral reefs. In Chapter 2, surveys conducted in the backreef of Moorea, French Polynesia demonstrated that under contemporary conditions, microhabitats that differed strongly in their level of light exposure had significant heterogeneity in the relative abundances of different CCA species. Additionally, the competitive abilities of individual CCA species generally shifted across the light exposure gradient, sometimes leading to switches in competitive dominance within an interacting species pair. These shifts in competitive abilities could partially explain differences in the abundances of the CCA species across the microhabitat types. Thus, light appears to be important for species interactions and community structure of these calcifying autotrophs in a contemporary coral reef. Using this ecological context, in Chapter 3 experiments were conducted in Moorea using the most common species of CCA found in its backreef, Porolithon onkodes. These experiments demonstrated that OA has an inhibitory effect on some aspects of photophysiology (e.g., Fv/Fm), and neutral (Pmax) or positive (the responsiveness of photosynthesis to sub-saturating light, α) effects on other aspects. However, when there was an effect, its magnitude generally depended upon light. Additionally, light did not influence how net calcification or respiration of light-adapted samples responded to OA. However, dark-adapted respiration rates doubled under OA conditions. These different responses potentially imply that in the short-term, photosynthesis can mitigate the stimulatory effect of OA on respiration, but has no effect on calcification rates under OA. Overall, the responses of Fv/Fm and dark-adapted respiration indicate that there may be a contraction in the light range tolerated by P. onkodes under OA. Consequently, due to the decreased competitive ability of this dominant species in lower light habitats (Chapter 2), this change in distribution under OA could magnify the decline of this species at the whole reef scale. Results from Chapter 4 demonstrate that contrary to studies conducted on P. onkodes from other parts of the Pacific, increases in temperature from 25 to 28 C significantly reduced the negative effect of OA on calcification in individuals from Okinawa, Japan. Gross photosynthesis, respiration, and tissue necrosis also significantly increased in the 28 C treatment, but were not influenced by pCO2. These results imply that some populations of this species may benefit from temperature increases associated with climate change, which will occur concurrently with OA (although tissue necrosis may limit the extent of this benefit). Combined with the results from Chapters 2 and 3, these findings indicate that the effects of OA on coral reef calcifiers like CCA will vary at multiple spatial scales both within and across coral reef ecosystems due to light and temperature differences at these locations. Consequently, it is probable that there will be shifts in the microhabitats, depth zones, and potentially geographic regions where various species of these calcifying autotrophs will persist in the future under OA.