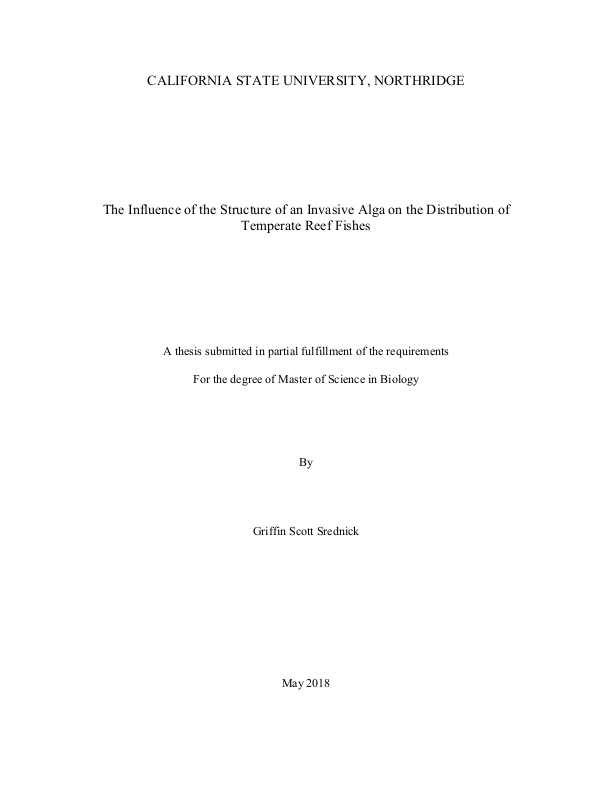 Algae are key foundation species within temperate subtidal reef systems as their productivity and structure can transform the physical composition of the reef landscape. However, previous assessments of the effects of variation in the algal community on fishes have been mainly focused on changes in the density and identity of algae, and often ignore how the unique structure provided by each alga contributes to such patterns. Recent warming of ocean temperatures has led to decreases in M. pyrifera and increases in the invasive alga Sargassum horneri along the southern California coast. While both species often form mono-specific stands, the physical structure (“architecture”) of S. horneri is different from that of M. pyrifera and other native algae with respect to height and shape. The goal of this study was to evaluate the effects of S. horneri on the temperate reef fish community at Santa Catalina Island, California, with emphasis on how unique differences in the physical structure among algae influence the spatial distribution and behavior of fishes. Observational surveys were performed five times across a one-year period at seven sites, to examine distribution patterns of fishes and how they related to differences in the algal community at the scale of sites spread over several km. Additionally, I developed a method to predict volume and surface-area from measurements of height for a number of algae to explore how overall differences in algal structure contribute to variation in fish distribution. In combination, I used surveys of the algal and fish communities to assess the relative importance of algal identity versus size on distribution patterns. The spatial distribution and composition of the fish community varied across the five sampling periods and was partially explained by variation in the density and identity of algae. In particular, I found that S. horneri and M. pyrifera were important predictors of variation in the fish assemblage. However, variation in the fish community was better explained by algal size (i.e., height, volume, or surface area) than by algal density and identity. To better understand the patterns observed at the scale of sites spread over several km, I performed a series of experiments and surveys of individual algae to test the relative importance of algal height versus identity on variation in abundance and behavior of fishes. In three separate experiments, I deployed isolated treatments of algae to examine differences in fish abundance and behavior among various species and size of algae. I found that fish abundance did not vary among algal species but rather among sizes of algae, even when compared across species. In addition, differences in the frequency of feeding and resting behavior were related to size of algae but did not vary among algal species. Field surveys of individual algae showed similar patterns: fish abundance and richness were positively related to algal size. However, differences in the fish community among algal species indicate that certain species (e.g., M. pyrifera) may be more important than others in providing habitat for fishes. These results suggest that the habitat structure provided by algae is important for fishes, but patterns of fish distribution may be more related to size than species of algae. In addition, fishes do not appear to be negatively related to the structure provided by S. horneri, yet a reduction in the tallest form of algal structure on reefs, M. pyrifera, may have important impacts on the distribution and composition of the fish community. The findings of this study highlight the importance of considering how morphological differences among algae influence the fish community.