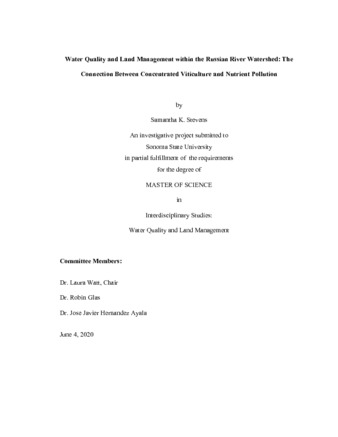 Water Quality and Land Management within the Russian River Watershed: The Connection between Concentrated Viticulture and Nutrient Pollution

Purpose of the Study: The Russian River watershed stretches across a significant portion of Sonoma and Mendocino counties, covering 1,485 square miles, and is home to not only humans, but countless fish and wildlife species as well. The Russian River valley is famous for being an ideal place to grow wine grapes and other agriculture, in part for its fertile soil, as well as the region’s Mediterranean climate. In addition to this, the Russian River is a year-round recreational hotspot for both tourists and locals alike. Maintaining a high quality of water in any area is important, and this is especially true when the local economy relies so heavily upon surface water. According to the North Coast Regional Water Quality Control Board, the entire Russian River watershed is impaired for sediment and temperature, and recent data also show pathogen impairment throughout the watershed. The Laguna de Santa Rosa sub-watershed is also impaired for phosphorus and dissolved oxygen, in addition to the impairments throughout the watershed (Russian River Watershed Overview, 2019). Land uses and water quality are interconnected in the Russian River watershed, but causal patterns between the two are not well understood. Procedure: Water quality data was obtained via the United States Geological Survey (USGS) and input into Microsoft Excel to generate time series graphs of different water quality constituents. The three sites selected are Jimtown, Digger Bend, and Hacienda Bridge. A model from the USGS ScienceBase inventory was utilized for this project, which consists of future land use, land cover, and population projections for the state of California for the period of 2001-2101. This model was projected as a layer in ArcGIS Pro in order to estimate the land cover changes based on low, medium, and high population projections for the years 2050 and 2100. In order to estimate the nutrient input for these different scenarios, models were constructed using WikiWatershed’s Model My Watershed tool. Within Model My Watershed, the land cover was altered to emulate the six models by adding polygons of the desired land cover, running the model, and observing the resulting nutrient and total suspended sediment load output. An additional aspect of this project is to conduct an analysis of policies. Findings: As land is developed into managed cropland, nutrients are typically added in order to increase production and profit. As a result, the runoff from cropland is typically nutrient rich when infiltration rates are low. Records from the Sonoma County Crop Reports indicate that the acreage of vineyards nearly doubled between 1990 and 2000. The exploration of potential land use and land cover changes through the projection of the USGS ScienceBase layers in ArcGIS and the modeling of nutrient load in Model My Watershed showed both an increase in agricultural land use as well as an increase in nutrient load, which is expected. The data obtained from the USGS Water Quality monitoring site did not show many points of interest or concern and generally followed a seasonal pattern. The policies in place in Sonoma County regulate both point source and non point source pollution, which is an extremely effective way to minimize polluted runoff from entering the streams and river in the Russian River watershed. The federal, state, and county regulations seem to be adequately minimizing point source agricultural pollution, and could benefit from increased riparian vegetative buffer zones to help slow the flow of polluted runoff, increase infiltration, and minimize the amount of nutrients that reach the waterways throughout the watershed. Conclusion: While this project did not result in a definitive answer as to what is causing the most nutrient pollution in the Russian River watershed, based on the findings of project, it is safe to speculate that total loads of suspended sediment, nitrogen, and phosphorus were lower throughout Sonoma County when there was less agricultural land use since the modeling data predicts higher total loads as agricultural land use increases. In addition to an increase in vineyard, the Sonoma County Crop Reports recorded a two - fold increase in the number of cattle in the county between 1990 and 2018.