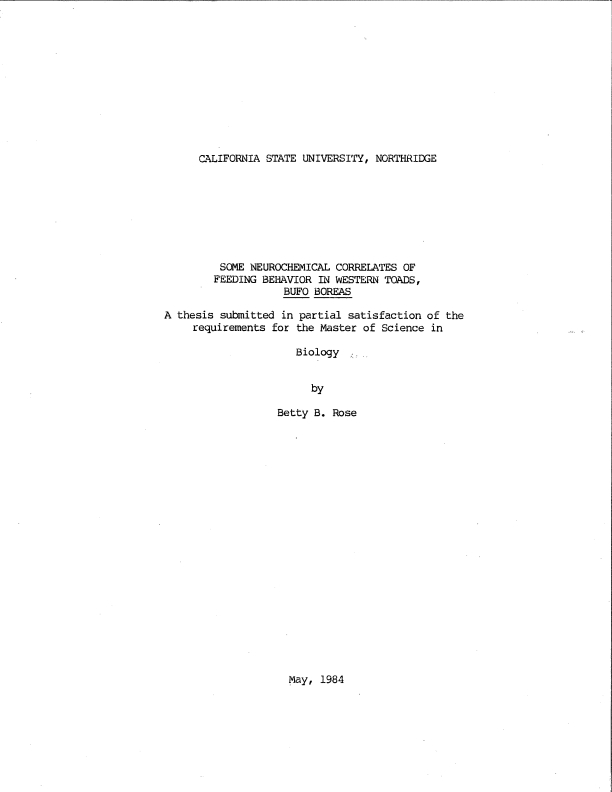 The brain of the toad, Bufo boreas, is used by neurochemists as a model for several abnormal neurochemical conditions in humans. Toad brain tissues can be made hyperosmotic (as is the human brain, for instance, prior to an epileptic seizure) by placing toads in NaCl solutions. Such hyperosmotic stress produces unusual behavior•. In this study I attempted to correlate abnormal behavioral states related to feeding with amino acid levels in the brain. Toads, both NaCl-adapted (hyperosmotic) and freshwater-adapted, were watched every other day while feeding. 1151 observations of 126 toads were made; 19 behavioral parameters were monitored. Discriminant analysis, based on 11 variables, was used to divide the observations into six behavioral groups (normally behaving, poor responders, very poor responders, poor hitters, very poor hitters, and non-responders). Groups are statistically different at the .001 level using a Roy-Bargman Stepdown Manova. Several other behavior patterns, incidental to the act of feeding, were occasionally seen during the tests. Eleven of these were described and their occurrence among the behavioral groups used to reinforce the group structure. Amino acids were extracted from three brain areas (cerebral hemispheres, olfactory bulbs, optic lobes) and the plasma of 64 hyperosmotic and freshwater-adapted animals, and quantified using an automatic amino acid analyzer. Levels of 22 amino acids in the brain and plasma were compared among behavioral groups. Identification of amino acids likely to be related to behavior was based on 2 criteria: 1) levels in normally-behaving hyperosmotic animals did not differ significantly from those of freshwater controls, and 2) levels in at least one abnormally behaving hyperosmotic group differed significantly from those of normally behaving hyperosmotic toads. Ten amino acids were identified as most probably related to behavior. Aspartate, gamma-aminobutyric acid (GABA), and phenylalanine were identified as related to behavior in all brain areas. The significant elevation of GABA among only the most behaviorally depressed groups is in agreement with its neuro-inhibitory role and consequent effect on behavior (Baxter, 1976; McGeer and McGeer, 1980). Aspartate elevation may be serving an osmoregulatory function. (See more in text)