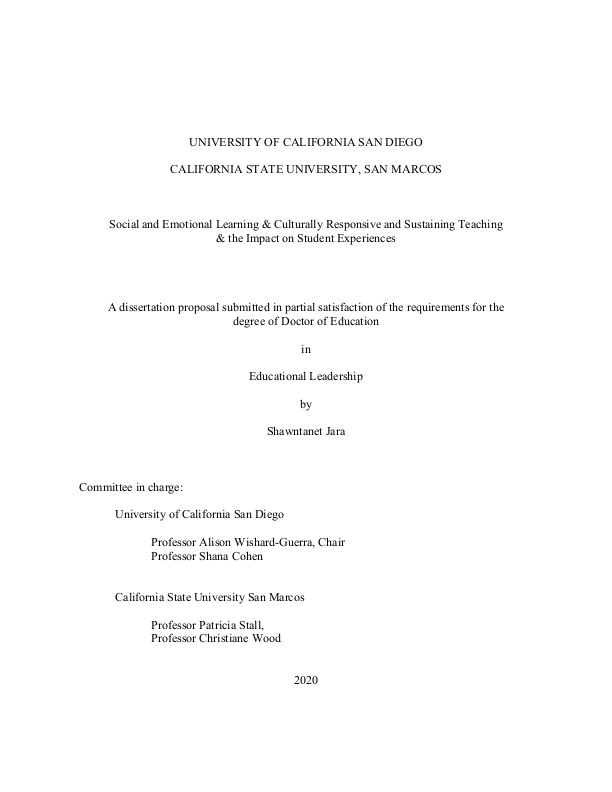 Social emotional learning (SEL) has emerged as a major thematic and programmatic emphasis in American education today (Hoffman, 2009). SEL is increasingly influencing the day-to-day practice of schools and communities (Elias, 1997). At the same time, increasing proportions of the student population in the United States comes from homes that are culturally and linguistically diverse (Orosco & Aceves, 2009). A contributing factor to the success of SEL is Culturally Responnsive and Sustaining Teaching (CRST) because culture is at the heart of all we do in the name of education. The impact of educator and parent perceptions at the intersection of SEL and CRST may hinder efforts of supporting students to thrive academically and socially. Futhermore, CRST has commonly been examined from the lens of low income and academically struggling schools, with limited research from the lens of affluence and academic prosperity. The purpose of this study explored and described how three affluent, resource-rich, and academically thriving Kindergarten-3rd grade schools support and/or inhibit SEL and CRST its impact on how student experience school. Affluent districts with high test scores may perceive themselves to be protected from the need to address culture head on. The majority of research regarding CRST is in low-income, urban communites, isolating upper middle income communities and perpetuatung the assumption that CRST does not apply to them. I challenge this dominant discourse as culture belongs to everyone and should be accessible in discourse in our schools. Our students are growing up in a diverse world and their successful navigation through it depends on the decisions our educators make in normalizing culture and emotions, take in and explore perspectives, and engage in daily reality checks. In affluent districts (and districts in general) where the majority of educators are white and female there is privilege that comes with that status and even more privilege when that status is placed within an affluent setting. Unless educators make a concerted effort to challenge their assumptions about what it means to be white, what it means to be a person of color and the impacts of being either on learning, working, relationships, behavior, etc. we will not properly equip students with the SEL competencies needed to make academic strides. Among this exploration was to understand what factors shape beliefs and practices of educators and parents regarding SEL and to what degree CRST practices contributed to these factors. SEL is comprised of five competencies of self-awareness, self-management, social awareness, relationship skills, and responsible decision making. Exploring how educators enact these competencies in an effort to know students and develop sustained authentic relationships is critical to social and academic success of every student. Drawing on parent and educator surveys, semi-structured interviews with teachers, classroom observations, student focus groups and student surveys, I attended to the beliefs, practices, knowledge, and attitudes that contributed to or withheld ways in which SEL and CRST work in tandem. I aimed to illuminate beliefs and practices in order to further understand how SEL and CRST practices correlate, interact and if not, why the lack of integration. Key words: Social Emotional Learning; Culturally Responsive and Sustaining Teaching; SEL Beliefs; SEL Practices; CRST Beliefs; CRST Practices In a very real sense we have two minds, one that thinks and one that feels. -Daniel Goleman (Emotional Intelligence)