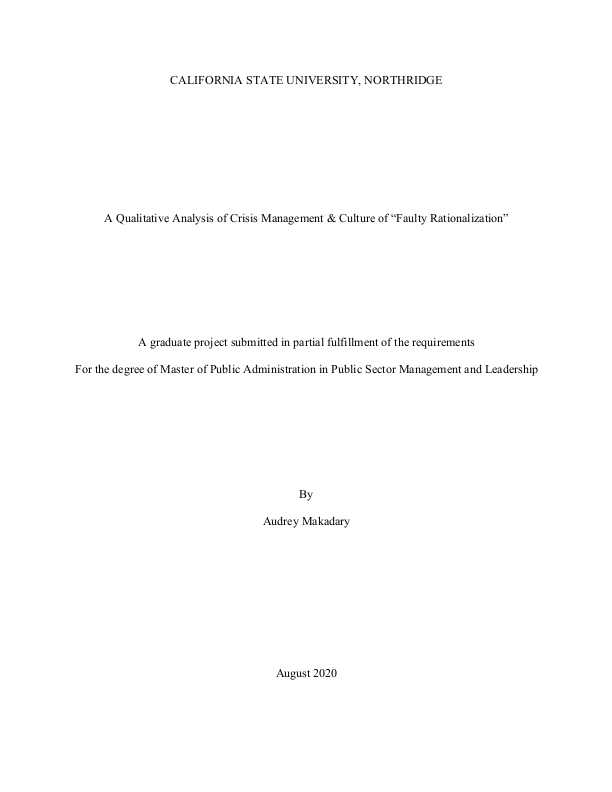 A crisis (from the Greek crisis, "solstice") is a crucial moment, a decisive turning point. The crisis in the general sense is interpreted as a turning point in the course of events, a point of change (Weiss, 2017, p. 32). Crises happen without any prior warning, always when we expect them least. Crises in organizations cause many problems and can sometimes lead to the collapse of the organization. Therefore, having a plan for preventing problems is necessary. In this paper, we analyze how a culture of "faulty rationalization" can prevent effective crisis management (Pauchant & Mitroff, 1992). Rationalization is described by psychologists as the mental process of justifying conduct; sociologists and historians elaborate on the concept to include behaviors, opinions, and theories (Sloane, 1944). An organization is formed of people who bring their own opinions and conducts with them, and who are influenced by the organization's own culture. Faulty rationalizations used as a frequent defense mechanism that can hamper crisis management. Faulty rationalization as a form of organization culture falls into four types: (1) some characteristics and unique properties of the organization that might make the organization immune to the crisis, (2) special environmental properties, (3) special properties of the crisis that will not affect the organization, and (4) previous crisis history and experience that supposedly make the organization immune to future crises (Pauchant & Mitroff, 1992). In this study, I show how important it is to avoid faulty rationalization in organizations, particularly public organizations that can face significant crises because of the scope of their responsibility. I explore how the following can hinder crisis management: (1) self-inflated individuals in managerial roles, (2) the quick-fix fallacy, (3) assumptions of teamwork cohesion from previous crises, (4) lack of systematic thinking, (5) defensive behavior by managers, and (6) leaders' greed for power and position. Any crisis that brings uncertainty eventually teaches us how to deal with it. To discover how organizational arrangements for crisis management develop, and how effectively they function, we should consider the nature of the organization's culture.