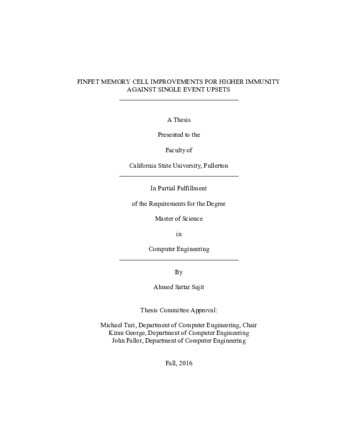 The 21st century is witnessing a tremendous demand for transistors. Life amenities have incorporated the transistor in every aspect of daily life, ranging from toys to rocket science. Day by day, scaling down the transistor is becoming an imperious necessity. However, it is not a straightforward process; instead, it faces overwhelming challenges. Due to these scaling changes, new technologies, such as FinFETs for example, have emerged as alternatives to the conventional bulk-CMOS technology. FinFET has more control over the channel, therefore, leakage current is reduced. FinFET could bridge the gap between silicon devices and non-silicon devices. The semiconductor industry is now incorporating FinFETs in systems and subsystems. For example, Intel has been using them in their newest processors, delivering potential saving powers and increased speeds to memory circuits. Memory sub-systems are considered a vital component in the digital era. In memory, few rows are read or written at a time, while the most rows are static; hence, reducing leakage current increases the performance. However, as a transistor shrinks, it becomes more vulnerable to the effects from radioactive particle strikes. If a particle hits a node in a memory cell, the content might flip; consequently, leading to corrupting stored data. Critical fields, such as medical and aerospace, where there are no second chances and cannot even afford to operate at 99.99% accuracy, has induced me to find a rigid circuit in a radiated working environment. This research focuses on a wide spectrum of memories such as 6T SRAM, iii 8T SRAM, and DICE memory cells using FinFET technology and finding the best platform in terms of Read and Write delay, susceptibility level of SNM, RSNM, leakage current, energy consumption, and Single Event Upsets (SEUs). This research has shown that the SEU tolerance that 6T and 8T FinFET SRAMs provide may not be acceptable in medical and aerospace applications where there is a very high likelihood of SEUs. Consequently, FinFET DICE memory can be a good candidate due to its high ability to tolerate SEUs of different amplitudes and long periods for both read and hold operations.