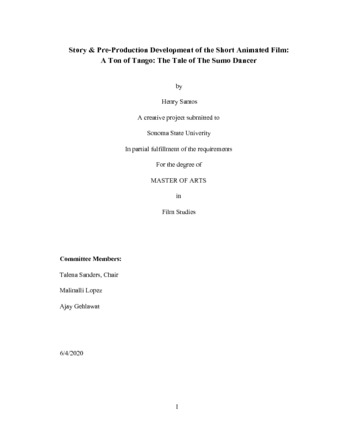 Story & Pre-Production Development of the Short Animated Film: A Ton of Tango: The Tale of the Sumo Dancer

Purpose of the Project: Animated films have allowed many fantastic stories to be told. Mythology, magic, and fantasy films thrive as feature-length creations of computer animation processes. Typically, these in large productions require large studios, extended schedules, and bottomless budgets. Rarely are non-mystical stories depicted in this genre by small teams. By depicting real-life situations with ordinary characters, the absurdities, difficulties, and realities in life can be expressed. My original fictional story expresses such human experiences, with no magic, etc... Sumo wrestling and Tango dancing collide in a short film that tells of an up-and-coming Sumo wrestler whose secret passion for Tango crashes head-on into a life filled with success, abundance, and respect. Atana wears the heart of a warrior and embraces the soul of a dancer. The purpose of this creative project is to start a small production of a feature-length film by writing an original screenplay’s establishing acts and developing a pre-production storyboard of a pivotal part of the story. Procedure: In developing the story, researching Sumo and Tango, with their nuances, rituals and actual occurrences is key to creating believable scenarios. The story can then start to be developed in screenplay software to maintain consistency and editability. Character and set design can begin, which allows for a more accurate depiction of storyboards. This initial practice can then proceed into the next steps in creating a completed animated film. Findings: In this particular creative process, initial ideas of the story, production, funding, and other areas of creating an animated short film proved to be extremely time-consuming. As with big productions, the amount of time needed in animated film production is often longer than anticipated. The story may begin as a spark of brilliance, but it’s telling requires research, revision, more research, more revisions, and heartache. My story, in particular, contains many personal experiences. These are not only heart wrenching to expose at times, but they also open floodgates of memories and emotions. Time is required to process this. During the storyboard stage, the story becomes visual and therefore tested for believability. The story enters a re-molding effect that develops it further. Conclusions: The creative process for creating an animated film requires many varied proficiencies. Although a filmmaker may have most or all the necessary abilities, the story presents itself as the critical component of an animated film. For quality, studios such as Pixar or Dreamworks spend a number of years developing a single feature-length story. My best-laid plans encountered this creative reality. Because of my emotional connection with the story, it now demands mindful writing and storyboarding.