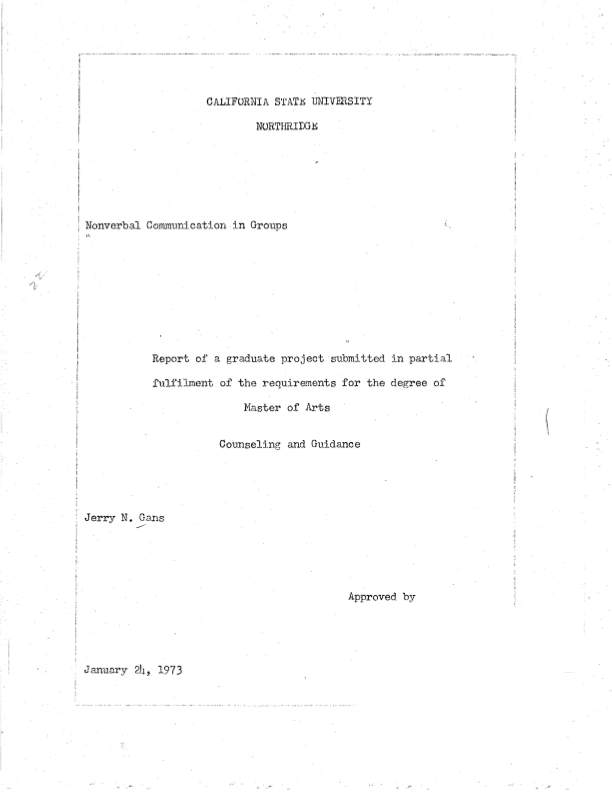 At present there are many methods of psychotherapy. Freudian, Rogerian, Gestalt, Rolphing, Sensitivity Training, and many more approaches are designed mainly to delve into person self-awareness and help him do the same. Each approach uses its own definitions, techniques, and philosophy; however each requires a deep personal investment by the client. Often therapy is painful, supposedly indicating deep emotional gain. All too often people assume that emotional gain is dependent on pain. Thus many people only feel real insight if they are tormented or cry. I call this the "Thanks, I needed that, syndrome. I realize that this is all totally subjective, but to show that there is at least some validity in the above, I quote Frederick Pearls. In Gestalt therapy Verbatim, Pearls said, “To suffer one's death and to be reborn is not easy.” This metaphorically implies that mental health is dependent on emotional death accompanied by deep emotional pain. In light of the above statements, I would like to add another approach to the ones listed above, groups based on nonverbal communication. This is not sensitivity, or touch groups, but rather an educational approach designed as a complement to other approaches or as a basis for group interaction in and of itself. Before explaining my own philosophy, I would like to present some background information that was influential in the development of my philosophy. My approach is based on a child's early learning experiences. In the pre-school years a child develops skills for interpersonal interactions. Children also learn to evaluate and interpret their and other person's behaviors. An experiment by Bandura, as described by Mussen, indicated that children learn processes of self-evaluation and judgmental orientations from even brief exposure to models. Aside from learning these specific procedures, children also derive much motivation from their parents. Motivation directs them into socially accepted behaviors, and thus they learn to avoid the anxiety associated with parental disapproval. In addition, a child experiences anxiety when his own behavior is incongruent with social rules. By the second year, a child begins to inhibit his own behaviors and also chooses a subject with which to identify. Through identification the child learns gestures and behaviors needed for social interactions Thus, a child acquires a set of behaviors that he will use and modify for the rest of his life; he becomes socialized. Socialization includes methods of coping, identification, interpretation, and impression formation as well as personal and interpersonal behaviors and skills. Most of these skills require intricate use of nonverbal and verbal techniques. Non I will present a short treatment of nonverbal communication as a subject in and of itself. Many professions, such as acting, are directly based on nonverbal communication. Actors, salesmen, and everyone rely on nonverbal techniques seemingly instinctively to express attitudes and feelings. Are nonverbal cues instinctual or are they learned social behaviors? (See more in text.)