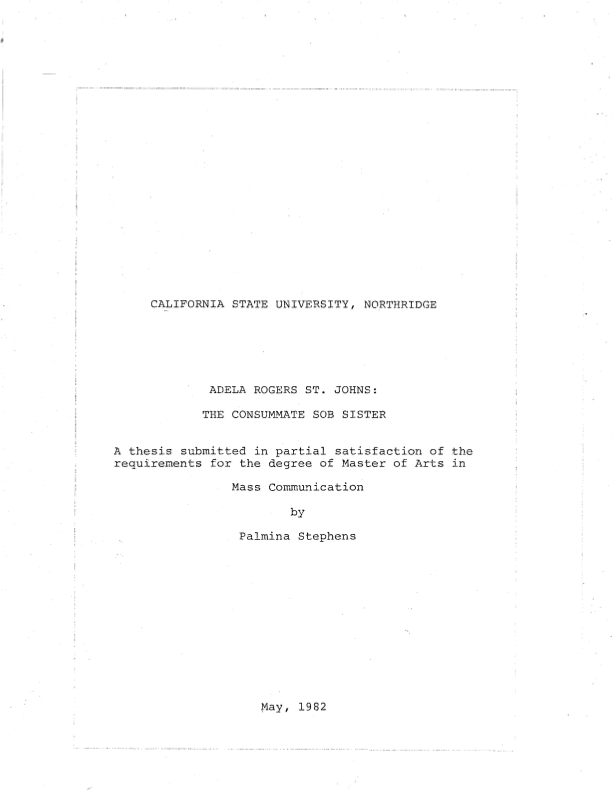 This thesis, a descriptive history, examined the life and career of Adela Rogers St. Johns, while focusing on the characteristics of her writing style. The hypothesis was that she wrote as an emotional sob sister throughout her newspaper years. St. Johns experienced a lengthy and prolific multimedia career spanning almost seven decades. Beginning in 1913 as a teenage cub reporter, she covered Los Angeles city happenings from sports to spectacular crimes. She created short stories in her spare time, entering the Hollywood arena by writing novels and scenarios. She covered politics, commented on the news for a New York radio station and wrote a Broadway play. She published her fifteenth book in 1981. Although having participated in all aspects of journalism, she stated on numerous occasions that her real love was for newspapers. From 1913 until 1948, St. Johns churned out sensational copy for publisher William Randolph Hearst, at one time his best-known and highest-paid reporter. She proudly avowed her sob-sister status. An analysis of the content and design layout of fifteen selected articles written during her thirty-five year tenure as a Hearst reporter attempted to discover the presence of specific attributes of the distinctive genre. From the evidence presented it was concluded that her newspaper work manifested most, if not all, of the sob-sister characteristics. It appeared also that Adela Rogers St. Johns played an important role in the history of journalism as the consummate sob sister.