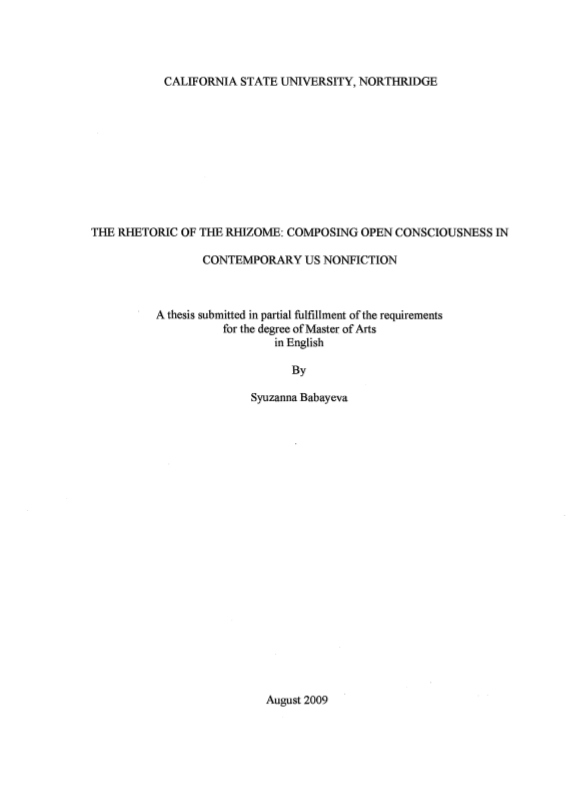 The rhetoric of the rhizome: composing open consciousness in contemporary US nonfiction

This thesis explores the manifestation of closed and open consciousness in conventional rhetoric of persuasion and the rhetoric of the rhizome. The rational mode of the Western discursive tradition has determined a pragmatic mode of consciousness, which gravitates toward discovering the rationality of truth opposed to the eternal motion of desire. Desire as a meaningful part of existence is examined in the works of Epicurus, Spinoza, Bergson, Freud, Lacan, Barthes, Derrida, and others. While emphasizing the vital role of desire, these theorists primarily associate desire with pleasure or lack and consider the notion of desire to be an indeterminate and antagonistic attribute in the logical contest of rational and irrational entities. This way of thinking creates a linear type of consciousness expressed in a cause-effect frame of persuasive argumentation dominant in Western thought since Aristotle. French scholars Deleuze and Guattari have problematized the notion of desire by locating desire in the rhizome as the main driving force of organic and nonorganic beings. They describe the rhizome as a nonhierarchical web of connections where all material matters are in a constant process of becoming. The rhizome excludes an idea of the finality of truth, offering a picture of the world based on difference and perpetual movement. The philosophy of the rhizome demonstrates an open type of consciousness which is not defined or limited by any conventions. My thesis demonstrates the manifestation of the conventional, or Aristotelian, type of consciousness through the rhetorical analysis of contemporary US nonfiction texts that offer finality as answers to the problems explored: Don't Sweat the Small Stuff in Love by Richard Carlson and Kristine Carlson, Stiffed by Susan Faludi, and What Shamu Taught Me About Life, Love, and Marriage by Amy Sutherland. I contend that each of these texts has a clear line of argument related to essential concerns of existence such as relationships, love, and the construction of social values framed as a clear-cut resolution presenting answer to the question posed. To illustrate the rhetoric of the rhizome, I analyze a different type of nonfiction that is not organized around one central point of view on the topics explored. Employing Deleuze and Guattari's concept of the rhizome, I call this type of nonfiction "rhizomatic" because it is written in a reflective mode and invites the audience to contemplate the ideas for possibilities and potentials. In the context of the rhetoric of the rhizome, I examine three contemporary works of US nonfiction: Against Love by Laura Kipnis, Close to the Knives by David Wojnarowicz, and Husbandry by Stephen Fried. Addressing principles of deterritorialization, multiplicity, and becoming as the vital categories of the rhizome, I demonstrate through the analysis of the rhizomatic texts an open consciousness of composing ourselves" (Lunsford). I compare the results of the conventional rhetorical approach to the rhetoric of the rhizome and suggest that the limits of truth that we impose on ourselves can be opened through incorporating the open consciousness of the rhizome into our lives.