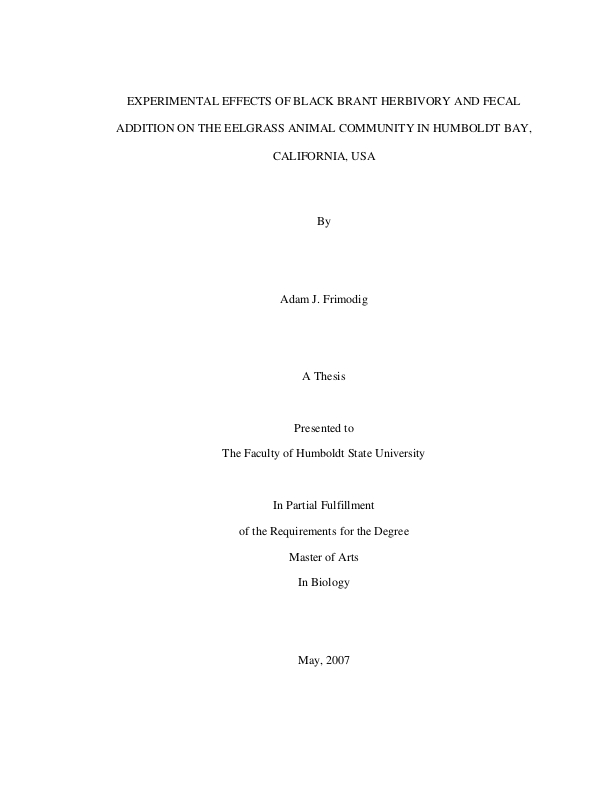 Seagrass beds are productive, structurally complex ecosystems that support an abundant and diverse assemblage of animals. Although light is clearly important to seagrass productivity, grazers also alter this aspect of plant communities. Grazers may indirectly affect the associated animal community but this perspective has not been rigorously examined in temperate western North American seagrass beds. My thesis objective was to experimentally examine the effects of Pacific black brant geese (Branta bernicla nigricans) grazing and fecal addition on the abundances and sizes of the animals within an eelgrass (Zostera marina) bed of Humboldt Bay, CA (40º 43.1’ N, 124º 13.3’ W). In situ brant simulations were used to investigate the effects of different treatments (clipping, fecal addition, the combination of both at “intermediate” and “intense” levels, and brant exclusion) on the abundances and sizes of the animals within the Z. marina community. Animal treatment responses were only compared when Z. marina vegetation structure (shoot density, shoot length) significantly differed among treatments. By including covariates like climate and water quality variables, as well as distance of a treatment from channels, this study also identified the recruitment and environmental conditions that favor the development of a positive or negative relationship between animal abundance and size versus Z. marina complexity. For example, large interannual variation in juvenile Dungeness crab (Cancer magister) abundance was attributed to warmer water current structure changes during 2005, and may have therefore delivered fewer megalopae to Humboldt Bay. Similarly, the effects of fish predation may have equalized the abundance and distribution of small Z. marina invertebrates, such as caprellid and gammarid amphipods and bay isopod (Idotea resecata), and thus prevented a relationship with vegetation structure from developing. Following the effects of climate on recruitment and fish predation, brant induced changes to the vegetation structure did affect animal abundances and sizes, but responses were species-specific. The abundance of Taylor’s sea hare (Phyllaplysia taylori) increased when a maximum number of shoots were created by intermediate levels of brant grazing, and both the abundance and size of P. taylori decreased in response to shorter shoots created by intense levels of brant grazing. Other animal responses responded negatively to brant induced changes to the vegetation structure. For example, I. resecata were smaller when shoots were more dense and longer, and they were larger when shoots were less dense and shorter. Lastly, the abundances and sizes of some animals were significantly different among brant simulation treatments, but animal differences did not parallel the brant induced changes to the vegetation. Therefore, brant induced changes to the structural complexity of Z. marina affect both the abundance and size of the associated animal community under a limited set of circumstances.