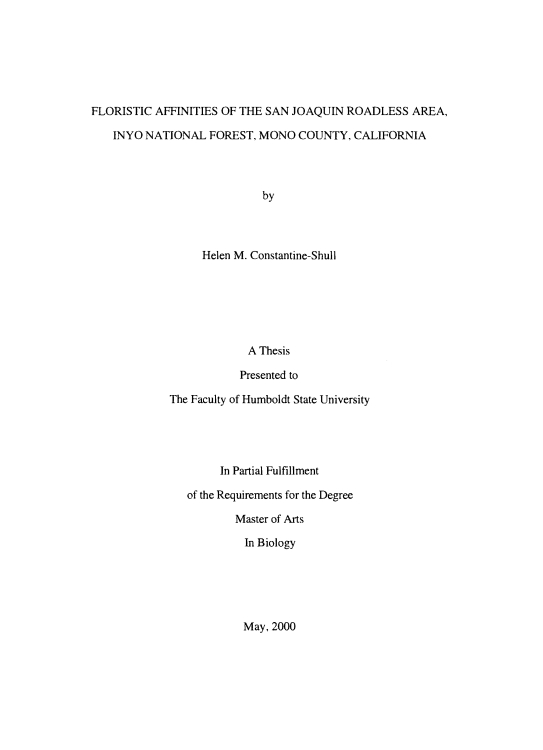 I surveyed the flora of the San Joaquin Roadless Area, a 44km2 area on the east side of the central Sierra, and then analyzed its floristic affinities (origins) using Sorensen's similarity coefficient, cluster analysis, and Bray-Curtis ordination. The analyses compare the area's flora to 12 other California mountain floras, and suggest an origin for recolonizing taxa after severe disturbances by Holocene volcanic activity. I have described the historic and present climate, geology, physiography, and vegetation of the area for a better understanding of the origin and condition of the flora. The San Joaquin Roadless Area flora consists of 446 taxa, including two rare (CLAPS List 1B) plants, Lupinus duranii Eastw. and Arabis pinzlae Rollins. The ranges of 3 taxa were extended. The flora is centered in geographic location, species composition, and proportion of phytogeographic elements in relation to other California mountain floras. Its species composition is most similar to Tuolumne Meadows (56%) and vicinity and least similar to the San Bernardino Mountains (30%). The average similarity between all 13 floras examined is 39%. The cluster analysis suggests three major groups of floras, 1) Sierran and Westside floras, 2) Great Basin and eastside floras, and 3) floras not similar to either group. My flora is included with other Sierran and Westside floras. The Bray-Curtis ordination shows a similar pattern, but with the three axes accounting for only 29% of the variation. Ordinations on subsets of the floras (1: Floras of similar size, 2: Floras close to the San Joaquin Roadless Area, and 3: Sierran floras) also show a similar pattern, with the three axes accounting for >70% of the variation between the floras. The phytogeographic affinities of the entire San Joaquin Roadless Area are generally consistent with those of the entire Sierran flora. However, within each affinity category they differ. The San Joaquin Roadless Area contains a higher percentage of Old Cordilleran taxa, and lower percentages of Circumboreal, Northern Hemisphere, Lowland California, and Great Basin taxa. A cluster analysis of the percentages in each affinity category shows a similar pattern to that of the other analyses. Conflicting extremes of wet and dry environments, due to weather patterns and volcanic soils, have come together in the San Joaquin Roadless Area to create a moderate environment that supports a newly immigrated, centrally aligned flora. The availability of favorable conditions has influenced the relative success of colonizing taxa with different origins and adaptations. The proportions of taxa from each region of origin are reflected in the dominating moisture regimes of the area. My results confirm the Mammoth Gap as an effective migration corridor for Lowland California taxa to the east side of the Sierra. Despite destructive volcanic disturbances, there is a possibility of alpine refugia where some of the first colonizers of the study area survived. A Sierran origin for the rare plant, Arabis pinzlae is suggested.