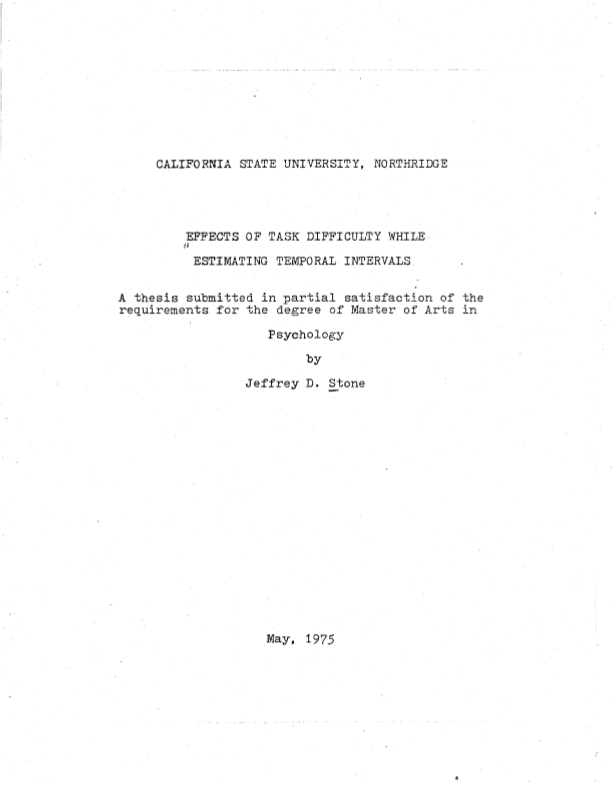 Two experiments were performed to test Ornstein's (1969) storage-size hypothesis of experienced duration regarding the effects of stimulus complexity on time estimation. The first study used solution latencies to scale the level of difficulty for 64 1 x 1 digit and 64 2 x 1 digit multiplication problems. The major hypothesis was that different processing mechanisms are required to solve 1 x 1 and 2 x 1 digit problems, and that the size of the digit being carried in 2 x 1 digit problems stresses the shorter memory rehearsal function. Six Ss were required to mentally calculate the solution and compare the result to either correctly or incorrectly presented solutions. A 2 x 3 (Problem Type x Solution Type) repeated measures analysis of variance, as well as both linear and stepwise regressions, were used in the analysis on solution latencies. As hypothesized, solution latencies were greater for the 2 x 1 digit problems. Furthermore, the regression analysis found that the size of the digit being carried was the best projector of solution latency for the 2 x 1 digit problems. A difficulty level based on the size of the multiplier was determined for the problems. Experiment 2 assessed the influence of the scaled mathematical difficulty on S’s ability to estimate the time spent performing these mental arithmetic tasks. Both problem type and level of difficulty were varied to yield four main groups: 1 x 1 Easy, 1 x 1 Difficult, 2 x 1 Easy, 2 x 1 Difficult. Twenty-four males and Twenty-four female undergraduates were randomly assigned to the four conditions. The dependent variables were the number of problems solved, the number of errors committed, and estimates of the 8, 12, 16, and 20 sec. task intervals. A 2 x 2 x 4 (Task x Difficulty x Interval) mixed analysis of variance, with repeated measures on the third factor, was used in the analysis of the estimation data. The significant main effect of Task indicated that Ss underestimated to a greater degree intervals in which 2 x 1 digit problems were being solved. The hypothesis of difficulty level affecting duration estimates was not supported; the 2 x 1 Easy condition resulted in greater underestimates than the 2 x 1 Difficult condition. A significant correlation between duration estimates and the number of problems solved was found for the 1 x 1 digit problems, but not for the 2 x 1 digit problems, indicating that Ss were using different strategies to estimate the intervals. An output matching strategy was suggested for the 1 x 1 digit problems, while a more diffuse, total time strategy was suggested for the 2.x 1 digit problems. Ornstein's storage-size hypothesis was supported for the 1 x 1 digit problems, but not for the more complex 2 x 1 digit problems. An alternate explanation, based on an attention model, was presented to explain the lack of support for the storage-size hypothesis, as well as a possible avenue of future research on the duration experience.