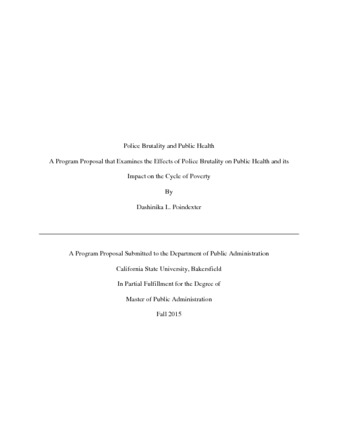 When President William “Bill” Clinton signed the Violent Crime and Law Enforcement Act of 1994, the bill added 100,000 more police officers into already fragile low-income American communities. Now, 21 years later, the National Academy of Sciences, established by an Act of Congress, found that there is little correlation between incarceration and lower crime rates (Johnson, 2014). The notion that increased policing saves communities is slowly becoming an age old belief, especially when the main victims of police violence are those who encouraged the policing—the working class (French, 2013). According to the “Washington Post,” “every 9 days, an unarmed black man is killed by the hands of police officers” (Somashekhar, Lowery, & Alexander, 2015). Due to organizations like Black Lives Matters and the National Association Advancement of Colored People (NAACP), the issue of police brutality has become a national concern. The American Public Health Association (APHA) is one of the only health and wellness organizations that is dedicated to influencing federal policy for public health. In 1998, APHA wrote a policy statement which recognized that “police brutality and excessive use of force are widely reported and have an disproportionate impact on people of color” (APHA, 1998). The impact of police violence on people of color has negative effects on the health and well-being of low-income communities. While public health attempts to shorten the gap between preventive care, physical and mental well-being, and safety, police violence causes unjust harm by prying open this gap and erasing the work of the public health official by causing: injury, disability, death, mental illness, and chronic disease in poor communities. The implementation of the proposed program will invite public health to the conversation of ending police brutality and will attempt to decrease the health outcomes associated with this violence.