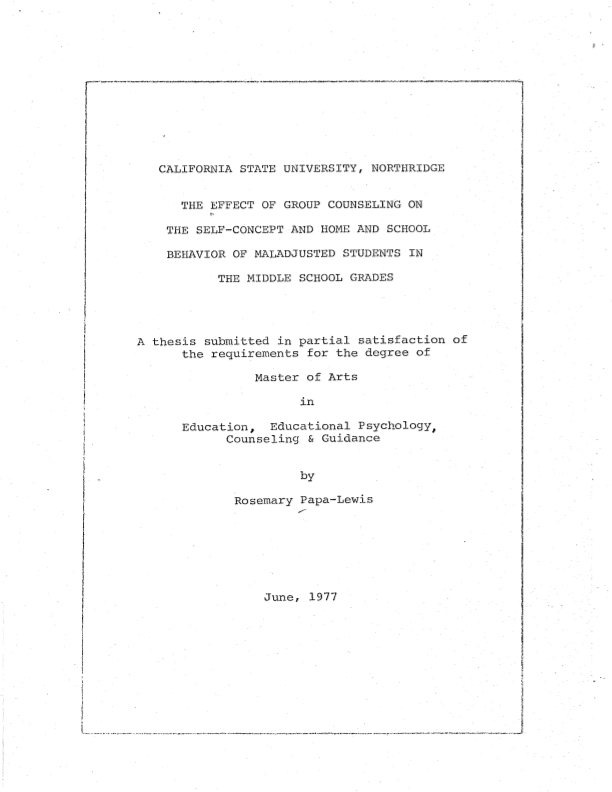 This study employed the hypothesis that within the Middle School environments, there is no significant difference in measured levels of self-concept with either behavioral, social, and/or academic maladjustment of heterogeneous students who have, and those who have not, received group counseling. The assumptions upon which the project was based were 1) that students exhibiting social, academic, and/or behavioral problems might have inadequate self-concepts, 2) that group counseling might be one method employed to ease the maladjustment within a Middle School, 3) through group counseling the student's self-concept will undergo change, and lastly, 4) that this change will be positive and be reflected in improved school and home behavior. These assumptions were measured through teacher, counselor, and parent evaluations. For this study nine students were chosen from counselor and teacher recommendations for an experimental group and nine for a control group, both being heterogeneous. Both were administered the Tennessee Self-Concept Inventory Scale, the Coopersmith Behavior Rating Scale, and a questionnaire designed by me. These were found to be matching with the results from the Pearson Product Moment Correlation, being a positive 0.99 match. The experimental group received twelve weekly forty-five minute group counseling sessions, and the control group received none. After twelve weeks, both groups were post-tested and, with a comparison of mean scores on the Tennessee Self-Concept Inventory Scale, those of the control group fell slightly while those of the experimental group rose significantly. Consequently, it was found in the study that group counseling did improve the self-concepts of Middle School students, resulting in a rejection of the null hypothesis.