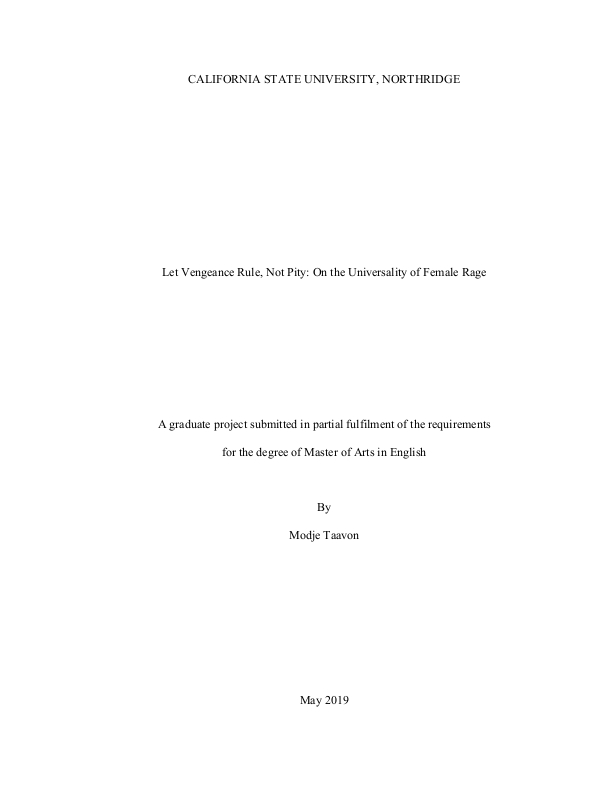 Let Vengeance Rule, Not Pity: On the Universality of Female Rage

In the wake of the current political and social climate, why is female rage regarded as still so new, still so unsettling, still so revolting when stories of oppressed and marginalized women are as old as the art of storytelling? A better question, perhaps, is how can it not be when French critics like Michel Foucault, Jacques Derrida, and Deleuze & Guattari (all channeling Gorgias of Leontini) argue that the written word holds no extra-literary meaning, that language is not only non-communicative, but uncommunicative? It is against the backdrop of such absurdities that this thesis challenges the orthodoxy prevalent in literary studies by arguing that literature is not an articulation of limitation or lack. Indeed, in literature, the patterns of human behavior that emerge out of analogous cultural circumstances spanning nearly 4300 years, are expressed from the point of view of the marginalized: woman, enraged. This thesis is a cross-cultural and historical analysis of world literature spanning from the ancient Near East of 2300 BCE through the Classical world, medieval, early modern, and nineteenth century Europe, and ending in twentieth century America and modern Middle East. These works feature female rage as both commentary and criticism of the oppressive and unjust sociopolitical and cultural structures of each and every time and place which gave birth to these literatures, and with these works, this thesis rejects the non-referentiality of language. Literary works speak to one another; authors speak to one another; and literature is found in the point of union between an author's desire to evoke something in an audience-whether that audience is a reader, a theatergoer, or both-and an audience's willing reception. The oppression of women, their rage at being relegated to the margins of society, their thirst for vengeance, and the spite which compels them towards insurrection and rebellion against the tyranny of oppression, of hypocrisy, of anti-intellectualism is, quite literally, the oldest story in the book. Insisting that such a thing is impossible-because language refers to naught but itself, after all-is nothing short of a violent gag-order. It's time the order is lifted.