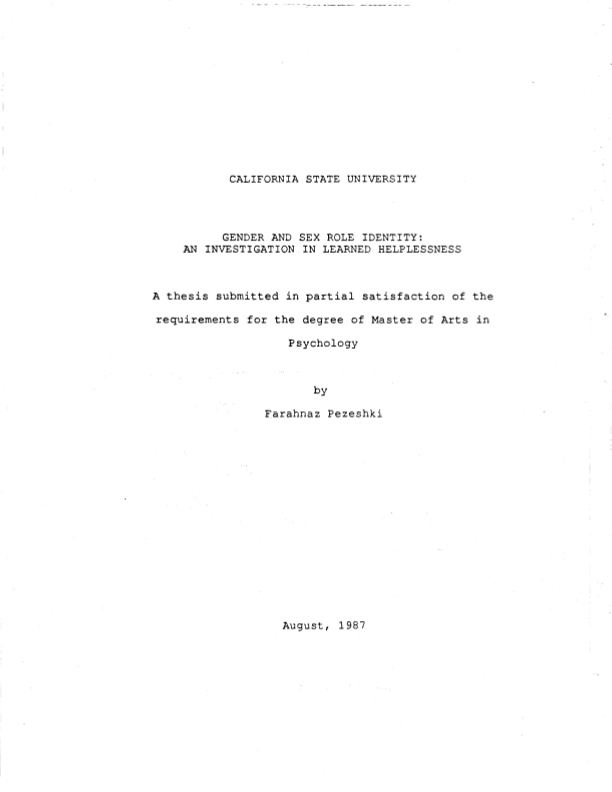 Gender and sex role identity : an investigation in learned helplessness

In order to investigate the effects of learned helplessness training on mood and also determine which gender and sex-role orientation have higher self-esteem and findout about their attributionl styles for negative and positive outcomes, 80 (44 women and 36 men) introductory psychology students from California State University, Northridge, completed the Depression Adjective Check List (DACL; Lubin, 1965), the Self-esteem Scale (RSS; Rosenberg, 1965) and the Attributional Style Questionnaire (ASQ; Peterson, Semmel, et. Al., 1982). Based on their scores on the BSRI (Bern, 1974) and using the median-split procedure, each of the subjects was assigned to one of four sex-role groups (androgynous, masculine, feminine, or undifferentiated). The central theme of this thesis is that failure in an intellegence test and expectation of future noncontingency between response and outcome induces dysphoric mood. It is also hypothesized that men have higher self-esteem, lower depression and attribute causes of bad event less internally, stably, and globally than women do. Masculine individuals, regardless of their gender, have the highest self-esteem and the least depression followed by androgynous, feminine and undifferentiated individuals. Masculine persons also attribute the causes of negative outcomes least internally, stably and globally followed in an ascending order by androgynous, feminine and undifferentiated persons. The reverse is true for attributions of positive outcomes. In accordance with these hypotheses, the relationships of gender, helplessness and sex-role identity with depression, self-esteem and attributional styles were assessed. A multivariate analysis of variance was performed on the 2x2x2x2 (gender x helplessness x masculinity x femininity) with repeated measures on the four dependent variables: DACL, RSS, ASQN, and ASQP. This study did not find any significant differences between the level of depression for women and that of men. In addition, the level of depression of helpless subjects was not significantly higher than that of the nonhelpless subjects. According to what was hypothesized, self-esteem was found to be significantly lower in low-masculine individuals than high-masculine individuals. Persons low on masculinity also attributed causes of good events less internally, stably and globally. The only significant interaction found was that of prepost by gender by femininity. For women, level of femininity did not significantly affect their attributional style for negative outcomes. For men, the attributional style of negative outcomes became more internal if they were low on femininity and became less internal if they were high on femininity. (See more in text)