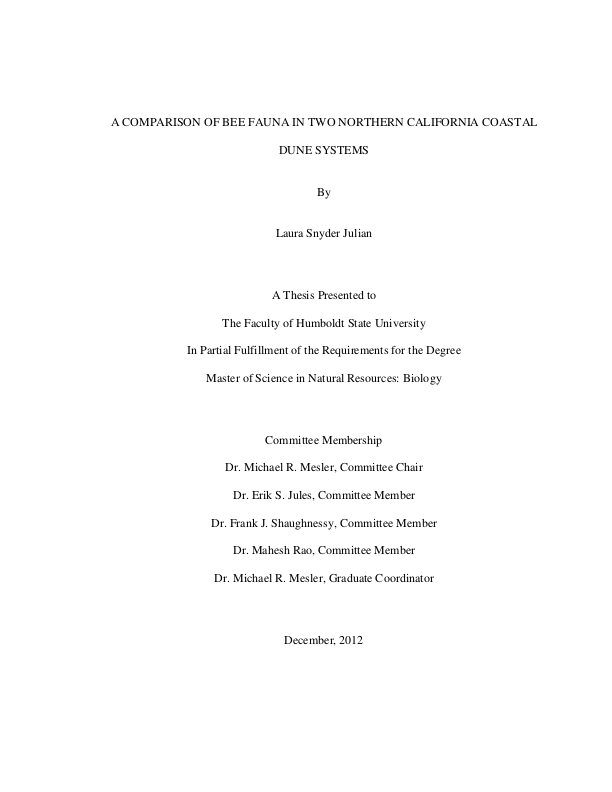 Baseline information is needed to protect pollinators in at-risk ecosystems. One such system, Tolowa Dunes (Crescent City, California), in northern California, is undergoing habitat fragmentation caused by an introduced, invasive plant, Ammophila arenaria. My study had two purposes: 1) to gather baseline data on the bee fauna at Tolowa, and 2) to explore possible relationships between bee fauna and available floral and nest resources in Northern California coastal dune systems. In particular, I assessed whether the presence of invasive non-native plants such as A. arenaria affected the bee fauna at Tolowa. Surveys were conducted at Tolowa from March through August 2007 to establish baseline information about the bee community, floral abundance, floral visitation, and bee nest substrate. Vegetation cover, determined from existing data, was used to explore the relationship between bee fauna and landscape at three spatial scales (100 m, 250 m and 1,050 m). Using existing data from previous studies, I compared the bee fauna I found at Tolowa to that of two other Northern California coastal dune ecosystems: the North Spit of Humboldt Bay (near Eureka, California) and Bodega Head (Bodega Marine Research Station at Bodega Bay, California). These three areas vary in the composition of their invasive non-native plant communities and bee resources, so comparing these areas can reveal relationships between bee fauna and these environmental factors. Bee abundance and species richness at Tolowa were positively correlated with intact, native dune vegetation, especially when the rare plant, Phacelia argentea was present. A negative correlation was found between cover of A. arenaria, coastal scrub, and total exotic vegetation versus the abundance and/or richness of all bees. NMS ordination found a scale-dependent relationship between bees and vegetation at 100 m and 250 m, where there was a positive relationship between solitary bees and intact, native dune vegetation. At all scales, solitary bees were negatively associated with A. arenaria, coastal scrub, and total exotic vegetation. Differences between the bee faunas at Tolowa, the North Spit, and Bodega Head are possibly explained by differences in nest substrate availability. For example, Melissodes pallidisignata is a bee that requires compacted sand for nesting. This bee was absent at the North Spit (where there is little of this nest substrate), but was present at Tolowa and Bodega Head, where compact sand is abundant. Differences in bee faunas at these locations are also possibly explained by differences in floral composition and abundance; while exotic vegetation was positively correlated with abundance of common Bombus spp. at the North Spit, a similar correlation was not found at Tolowa. Possibly, this is because invasive plants at the North Spit provide some floral resources, whereas at Tolowa the only invasive plant is A. arenaria, which provides no floral resources for bees. My results suggest that the diversity of the coastal bee community at Tolowa is at risk due to habitat fragmentation from A. arenaria invasion.