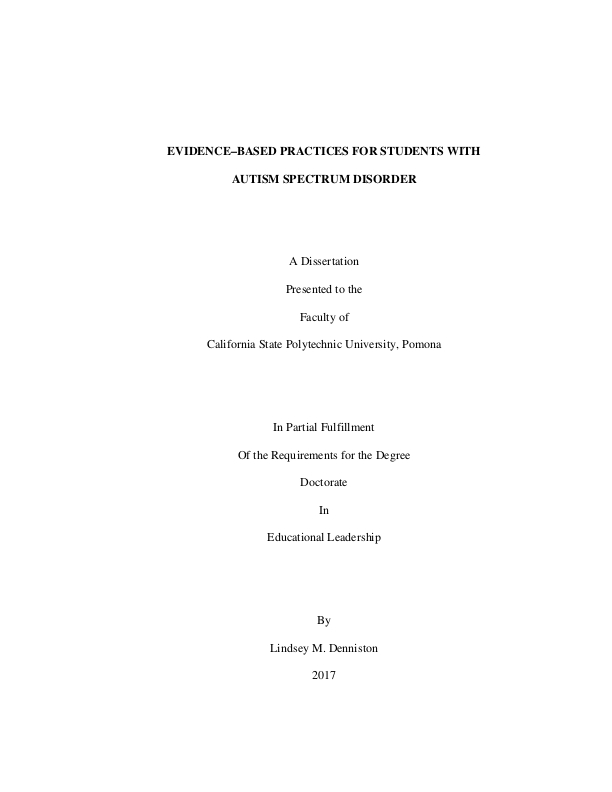 Evidence-based practices (EBP) are required to be used for all students including those students with Autism spectrum disorder (ASD; Individuals with Disabilities Education Act [IDEA], 2004; No Child Left Behind [NCLB], 2002; Education Sciences Reform Act, 2002); yet, there continues to be a research to practice gap with the percentage of special educators utilizing EBP around 30% (Hess, Morrier, Heflin, & Ivey, 2008; Lilienfeld, Marshall, Todd, & Shane, 2015; Spencer, Detrich, & Slocum, 2012; Stahmer, Collings, & Palinkas., 2005). This survey study investigated elementary special educators’ current definitions of EBP for students with ASD, the sources of information they consult for information about EBP, and their use and beliefs about EBP for students with ASD. A modified version of the Autism Treatment Survey [ATS] (Morrier, Hess, & Heflin, 2006) was administered to special educators in an Inland Empire District in Southern California. Results indicated that respondents defined EBP as researched practices with positive outcomes and utilized three sources for information regarding EBP: conferences and trainings, pre-service programs, and online materials. All of the respondents reported using six practices: naturalistic interventions, differential reinforcement (reinforcement), extinction, modeling, prompting, antecedent based interventions, and functional behavior assessments. Practices that fell below the acceptable reported use threshold of 70% included: pivotal response training (PRT), cognitive behavior therapy, scripting, video-modeling, and self-management. All practices, except for pivotal response training (PRT), had a greater reported use than reported belief that the practice was an EBP. Implications, limitations and directions for further research are discussed.